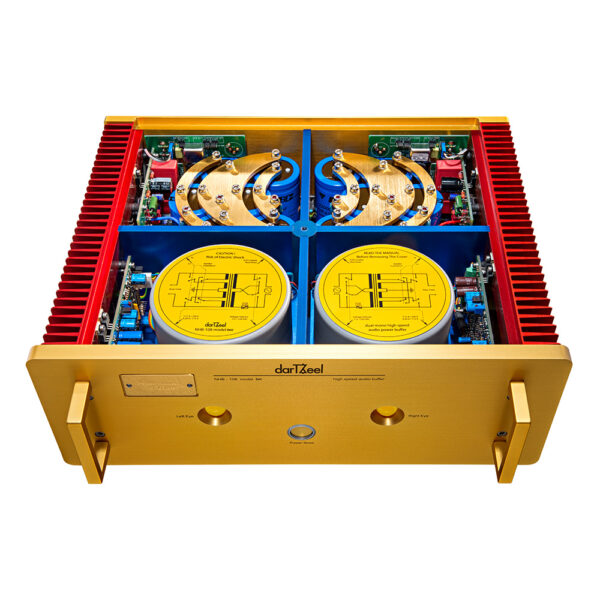 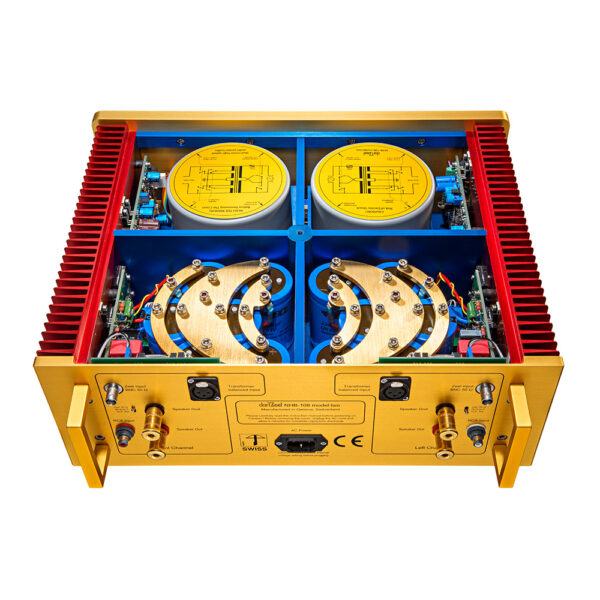 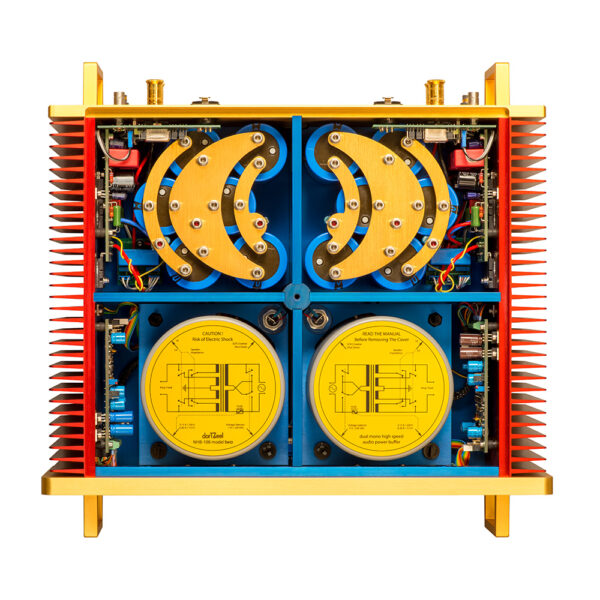 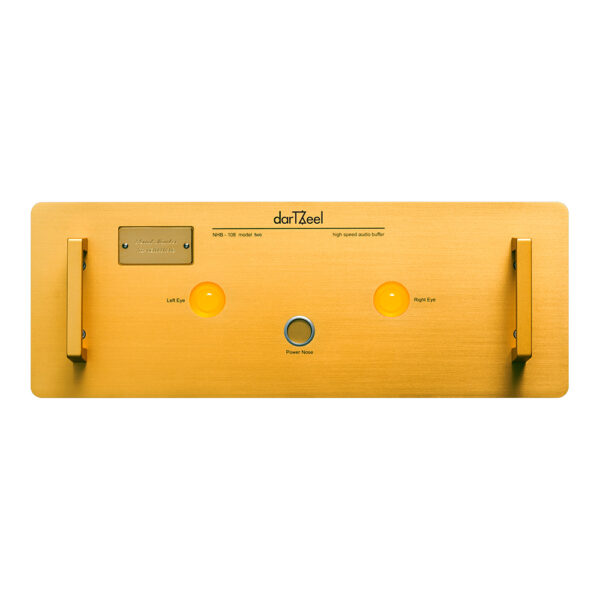 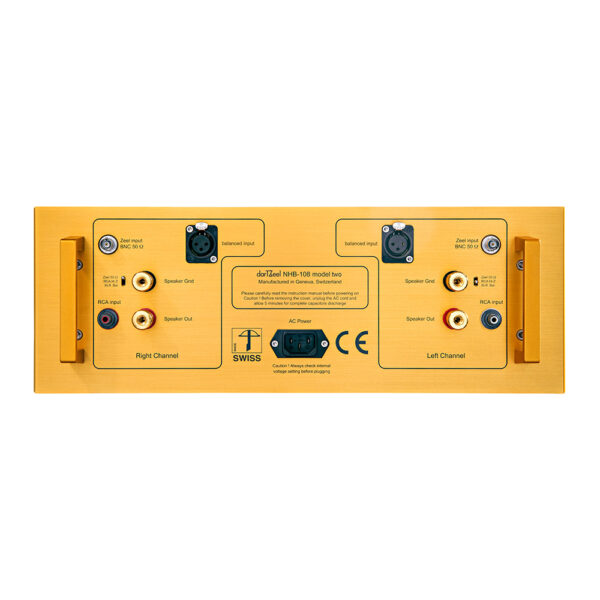 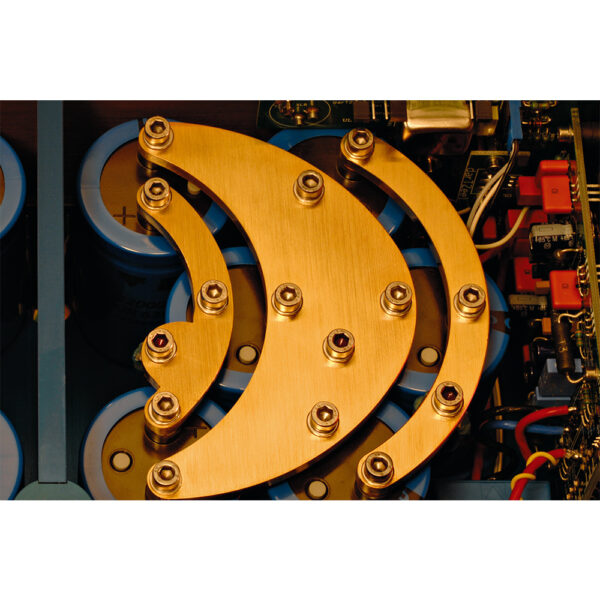 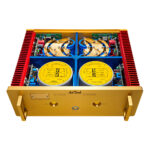 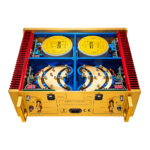 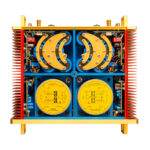 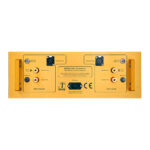 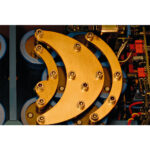 Although the darTZeel NHB-108 Model One power amplifier was first introduced in New York in 2002, it had taken Hervé Delétraz over 16 years research to ready it for production. It was immediately recognised as the most advanced amplifier ever designed, a description that the modern incarnation, the NHB-108 Model Two still carries. The NHB-108 has earned legendary status among critics and music lovers alike. Its immediate success and multiple awards helped to quickly establish darTZeel in the premium market.

Hervé Delétraz meticulously explored the possibilities for reproducing music in all its emotional richness and splendour. The end product is an electronic audio circuit that has been greatly trimmed back to offer exceptional simplicity, which no one before thought possible.

The NHB-108 is the ultimate dual-mono power amplifier. In the relentless pursuit of perfection, everything must be considered down to the slightest detail. With two power supplies, two transformers, two audio circuits, and two coolers, the darTZeel model two is very much a dual-mono design in every respect. The single power supply cord is the only sign that everything is housed within the one chassis. With power output of 150 watts per channel and its circuits patented worldwide that prevent global negative feedback, the NHB-108 model two connects effortlessly with any type of speaker, unleashing its full magic and capability.

darTZeel amplifiers delight not only in terms of how they sound, but also how they look and feel. Through its toughened mineral glass panel, one can admire the fine-brushed, crescent-shaped bus bars made from 24-carat gold and the carefully partitioned internal layout that gives this exceptional amplifier its unique character.

The sonics of this amplifier are communicated in its part number ‘NHB’ (Never Heard Before) and one audition will reveal the truth of this statement. The sound has a warmth and naturalness that convinces people that they are listening to a high-quality tube amp yet at the same time a speed and dynamic headroom that convinces them that it is in fact a high-powered solid-state amp. It reveals in fact, just how limiting our references and discourse has been in the world of audio reproduction, reveals in fact what is possible.

The NHB-108 Model Two is a revelatory product that simply has no sonic equal. It awakens the senses and opens a portal to an invigorating, engaging musical experience. Superb!

Stereophile, Jason Victor Serinus, 2022
DarTZeel’s NHB-108 model two, the latest iteration of darTZeel’s first product, is among the most satisfyingly musical amplifiers to ever sing in my system. Rather than hit you over the head with its strengths, it seduces with its exceptional embrace of music’s essence. Details frequently submerged in the sonic fabric surface with a delicacy and rightness that illumine what you’ve previously been missing. This holds true for intimate solo vocals, classical chamber music, and big-boned rock, jazz, orchestral music, and opera. Especially when paired with its matching NHB-18NS preamplifier and top-line Zeel 50 ohm BNC interconnects, the NHB-108 model two sounds disarmingly transparent, real, present, and alive.
Read Review
Hi-Fi+, Chris Thomas, 2020
The resultant tone, note shape, and expression that each musician can extract allow them to create a different kind of tension – this time in the listener. Each instrument drowned the room in dripping colour. The way the daRTzeel shows the differences in reverb speed, dynamics, and the layers of harmonic bloom that swirl around as the art of the luthier joins the circle is fascinating. If you think an acoustic guitar is a simple thing, then I assure you it is endlessly complex in both scale, speed, and tonality. When it comes to the sheer resolving power of the amplifier, then it goes way down to the sub-note level, and it does it effortlessly… …I loved my time with the daRTzeel amps as much as I have with any product over the years. The pair are not in any way ‘cheap’, but they are primarily so involving and musically enlivening that price becomes a secondary concern. They delivered such musical joy and involvement that it has indeed been a rare privilege to have them at home, and I was extremely sorry to see them leave. They are truly exceptional and a huge testament to Hérve Delétraz and his audio art.
Read Review
Absolute Sounds, Martin Colloms, 2020
This beautifully crafted Swiss pre/power combination has been highly developed to deliver unusually natural and musically entertaining sounds. It is involving, pure in texture, most unfatiguing and delights the ear. An Audio Excellence rating is well deserved.
Read Review
Six Moons, Mike Malinowski, 2005
Hervé started this journey with the premise of designing not just another amp but one that was truly better. Did he succeed? Spectacularly so. The 108 is a dazzling tube-sounding amp cavorting around in the guise of transistors. It has the best traits of tubes and solid state – magic midrange with spectacular soundstaging. It is harmonically rich and satisfying. The sound touched my soul. It infused air around the instruments and made music come alive with a deep and powerful low end. It is truly involving, with a gorgeous liquidity that conveys the emotion of the music. Having graduated to tubes, I thought I’d never look back. The darTZeel has made me rethink that premise. It’s a stunning piece of equipment that has raised my system to a new level of performance. Highly recommended.
Read Review 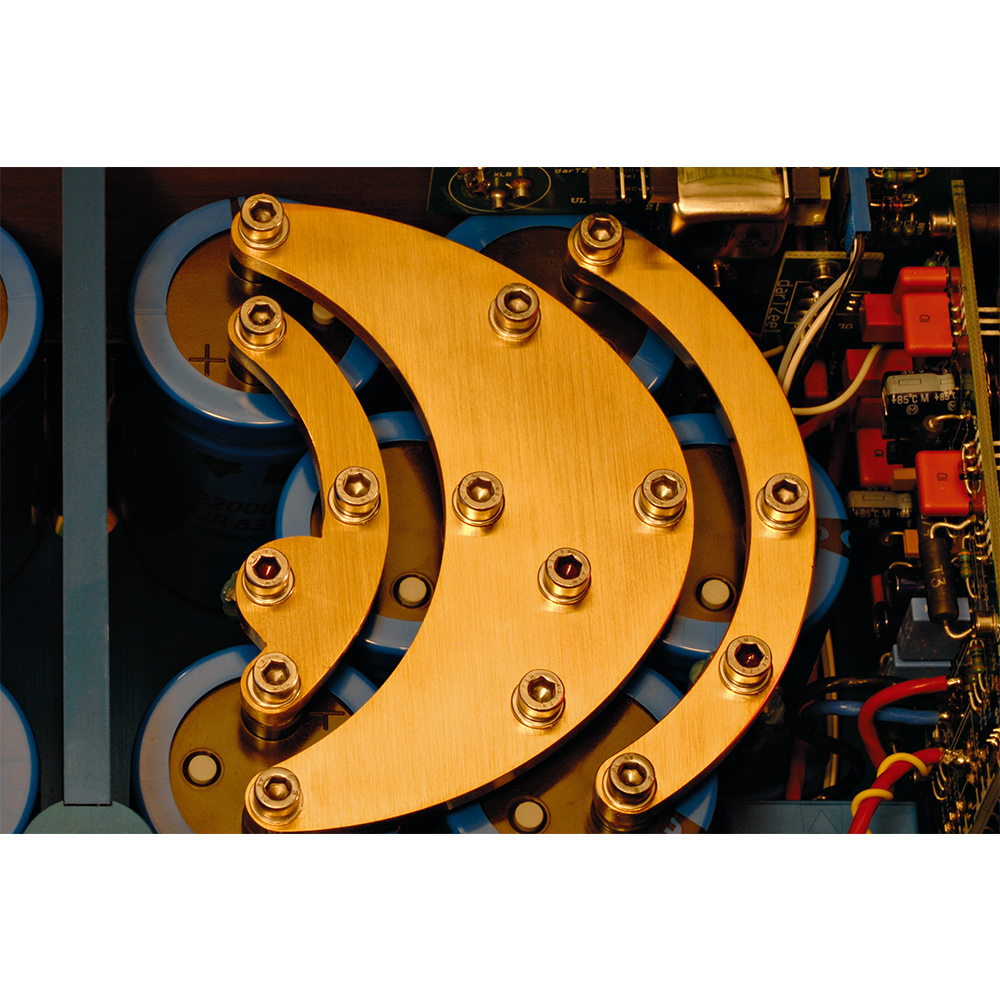