We consider ZELLATON® to be the Patek Philippe of high-end speakers. Unprecedented attention to detail and an obsession with quality defines these handmade German speakers that have been the benchmark for lifelike music reproduction for more than 85 years.

ZELLATON® are characterised by their unique multi-component hard foam diaphragms that were invented by Dr.Emile Podszus in the 1930’s and further evolved by Manuel Podzus in the modern era. To be frank, there’s a good reason why no other speaker manufacturer even attempts this technology. Manufacturing these diaphragms involves a very elaborate process of construction, oven baking at a certain temperature for a specific time, cooling for a specific number of days, then repeating the process a number of times, applying the ultra-thin metal layers with great accuracy and many other elaborate steps that need to be perfectly executed. It takes months and by the time a set of diaphragms complete this process, a high proportion of them are discarded because they have to pass a stringent set of tests and measurements. It is a highly laborious, time-consuming, very expensive process which does not make financial sense – but in terms of sound quality, it makes total sense!

It is not ‘the road less travelled’, it is the road that no one attempts apart from ZELLATON®. Every aspect of their design, material composition, construction and engineering is executed to the highest known standards. For example, just the cost of the material parts required to make their crossovers is higher than a new pair of decent high-end speakers alone. Zellaton speakers are a true destination product. They take a long time to be manufactured and every speaker is individually tuned for perfect synergy between the drivers, electronics and cabinet. This level of attention to detail results in a perfect yet absolutely unique speaker.

Is all this incredible effort and uncompromising commitment to quality worth it? Higher budgets give you access to some pretty awesome speakers, so do you really need to go to THIS effort & cost? Well, the answer depends on what you are trying to achieve with your system. If your main objective is to create sound with absolutely natural tonality and realism…. then the answer is an emphatic YES!

Zellaton are not just great speakers. They are rare, boutique works of obsessive craftmanship. They are ‘pieces’ that transcend normal paradigms that audiophiles talk about. Those lucky enough to have experienced them (including a few prominent reviewers) have described the feeling of being ‘stopped in my tracks’. We were blown away by their naturalness. If you are one of those audiophile’s who rank ‘naturalness’ as your top priority, ZELLATON® speakers are your salvation. If you are sensitive to this quality, once you hear it and connect with it, you can’t help but be unsatisfied with the ‘hi-fi’ sound of other speakers. It’s uncanny.

ZELLATON® are the antithesis of the unfortunately common example of some high-end brands who buy some drivers from a driver OEM, build a reasonably inert cabinet to put them into, build a crossover network indistinguishable from everyone else where the objective was to keep the costs down, and then polish it up to ‘look expensive’. This is not a company that cares about hype, notoriety, sponsored reviews and marketing budgets. This is a company that manufactures its own drive units and complex cabinet designs in-house, making unique drive units that take months to finish using know-how that has taken more than 85 years to perfect. This is the epitome of boutique high-end speaker creation – the perfectionist’s choice. 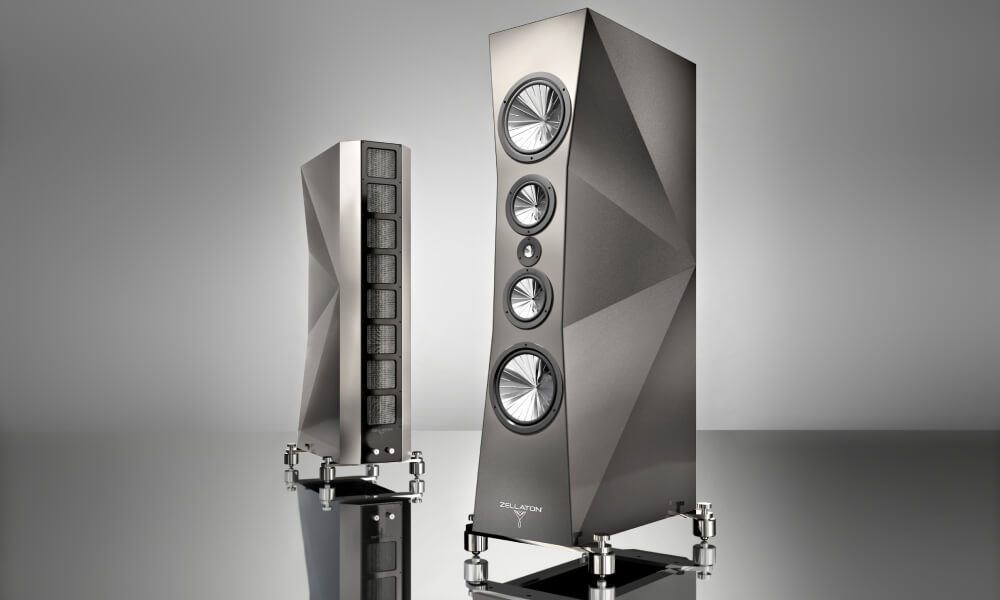 The heart of any dynamic driver speaker is its driver units. Most speaker companies buy their drivers from driver manufacturers so they leave that research & development to other specialists. However, those companies are motivated by commercial constraints to keep the cost of their drivers as low as possible so that they can sell enough volumes to have a viable business. Therefore, even with expensive reference speaker models there are compromises. If a speaker company wants to move beyond those compromises, they need to make their drivers in house to the standards that they aspire to.

In the late 1920’s – early 1930’s, Dr. Emil Podszus devoted his talents to eliminating the disadvantages of existing dynamic driver designs which resulted in a number of new inventions. For example, he developed an electro-dynamic loudspeaker with several coaxially arranged cone diaphragms of different sizes – still available on the market today, 91 years later as buzzing cones. In 1931 he released his fourth patent application:

“A sound reproducing device with a mechanically damped diaphragm, characterised in that between the diaphragm and rigid abutments located at a distance of a fraction of a centimetre from it, fine, resilient structures of hard, highly resilient material used in a thickness of dog stems of millimetres are applied in a few, narrowly defined zones.”

This invention became the basis for the driver that ZELLATON® developed and evolved to this day.

Dr. Podszus believed the membrane could be improved. He used hardened fabrics impregnated with varnish and resin, later used different fibres and fillers bound into the varnish and then experimented with different membrane thicknesses. He eventually found a solution: a foam solidified on a carrier with bubbles of different sizes – enclosed by walls a few hundredths of a millimetre thick. By varying the films on the front and back as well as the quantity and type of fillers he was able to further optimize the sound conduction and damping as well as the hardness and rigidity of the membrane. The next design evolution was the use of plastic foils for the bead and the centring, the design of which enabled him to significantly improve the impulse behaviour of the transducer.

A further milestone was his ‘Plurale’: several geometrically arranged loudspeakers of different sizes per stereo channel. As a result, he was able to significantly reduce the stroke of the single chassis and thus the overall distortion. He also developed a new tweeter which had an unprecedented transmission range of up to 16,000Hz.

The designs of Dr. Podszus and his son Kurt quickly became regarded as the highest quality speakers in the world and they inspired many private & commercial customers with these exceptional loudspeakers which were often referred to as ‘ahead of their time’. They built loudspeakers for the studio specialist Klein + Hummel ad many others. Many people consider Dr. Podszus as the ‘grandfather of high-fidelity loudspeakers’ and today, his grandson Manuel Podszus continues the family tradition – committed to build loudspeakers that are truly ahead of their time. 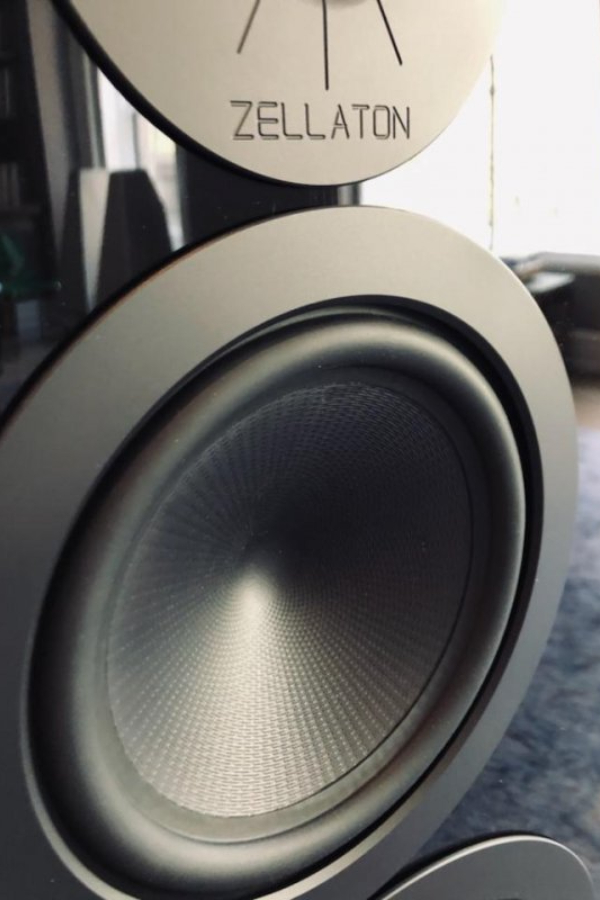 Manuel Podszus’ passion for music reproduction true to the original runs in his blood. Early on he developed loudspeakers with the well-known hard foam membrane ‘Podszus-Zellaton’ by Görlich. Since no tweeter was available that could perform to the standard required, he began to experiment with the technology developed by his grandfather and began to bake diaphragms.

However, developing a tweeter with hard foam technology proved to be more challenging than expected and decades would pass before all the technical problems were solved. The membrane had to weigh significantly less than 200mg, still work without partial vibration and of course be stable enough. Only pure iron was considered as the magnetic material in order to achieve a field strength of approx. 20,000 Gauss. Countless materials, shapes, geometries, sizes and coatings were tested and continuously optimized for centring and beading.

At the same time the further development of the larger bass driver sizes began and for them to integrate for a perfect cohesive sound, their design & execution was meticulous. By varying the magnetic field strength, the spring stiffness of the centrings, the wire strength of the voice coils, the adhesives used, the bubble sizes in the diaphragms, etc., including some well-kept company secrets, they were able to achieve numerous improvements and an unrivalled performance. Several containers filled with disassembled loudspeakers testify to the unbelievable effort that has been made to this day. But in the end, it was all worth it, this is purity of musical reproduction at its finest.