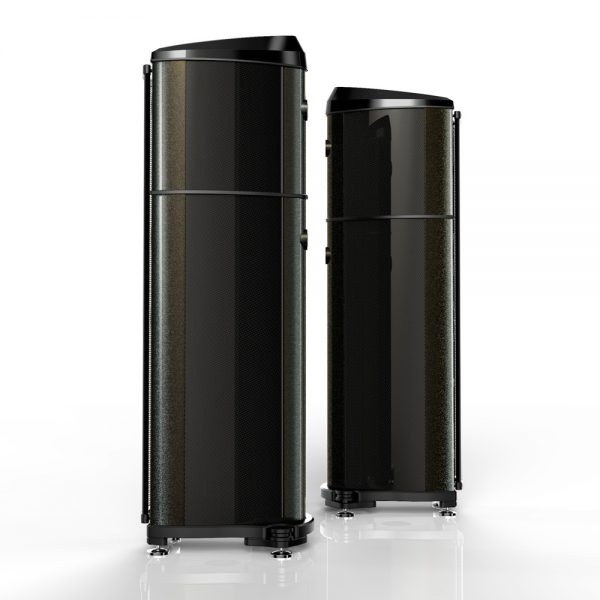 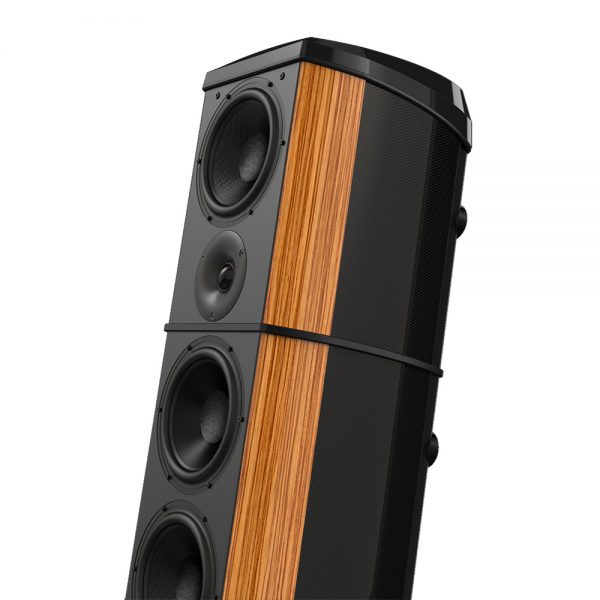 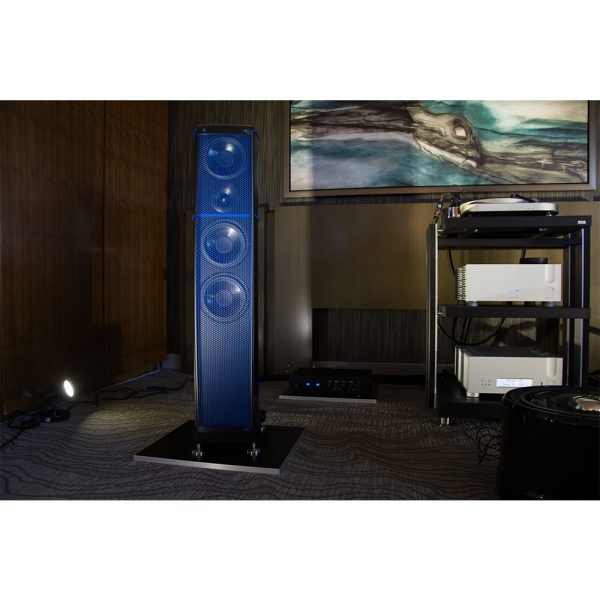 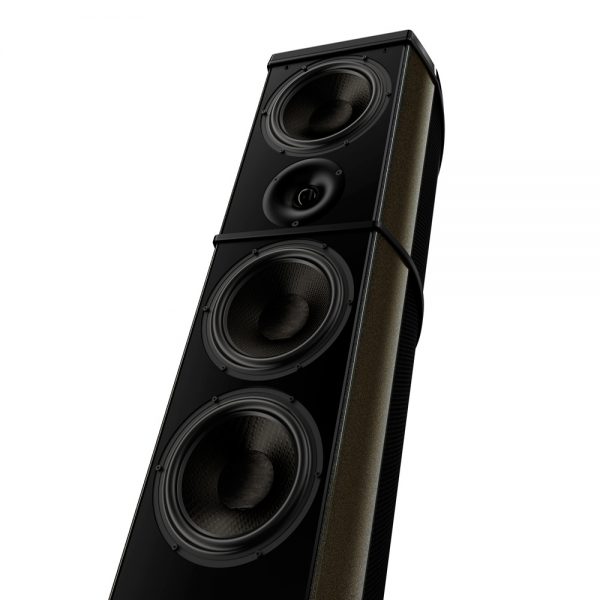 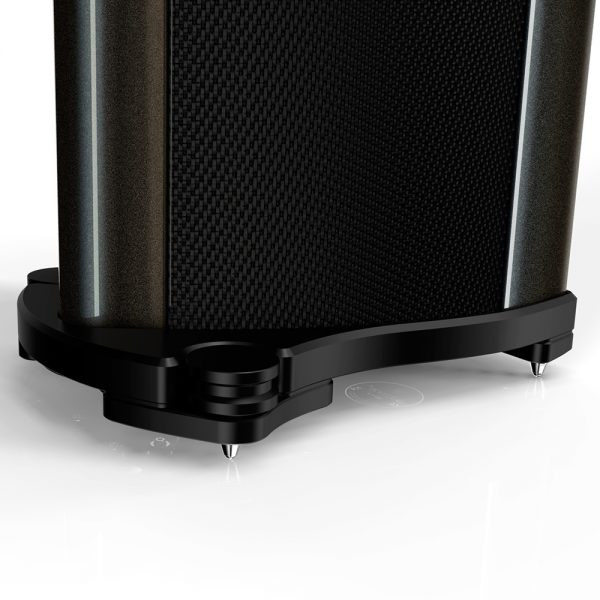 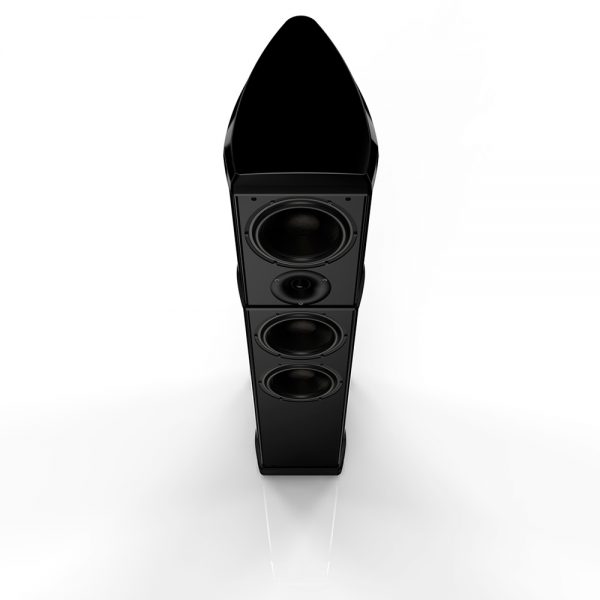 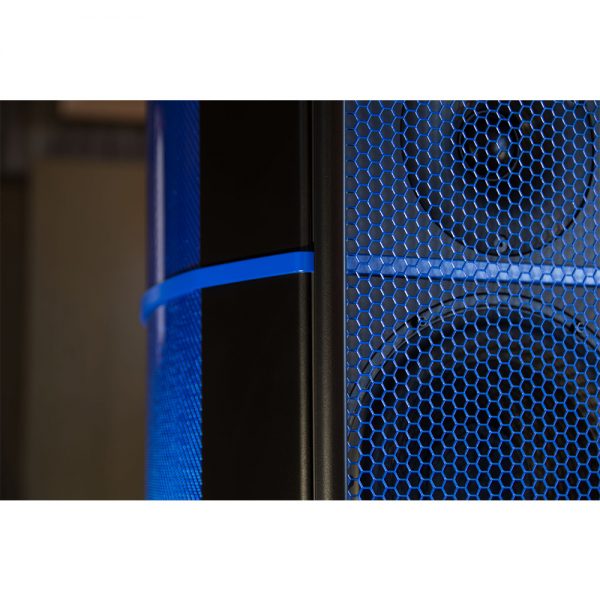 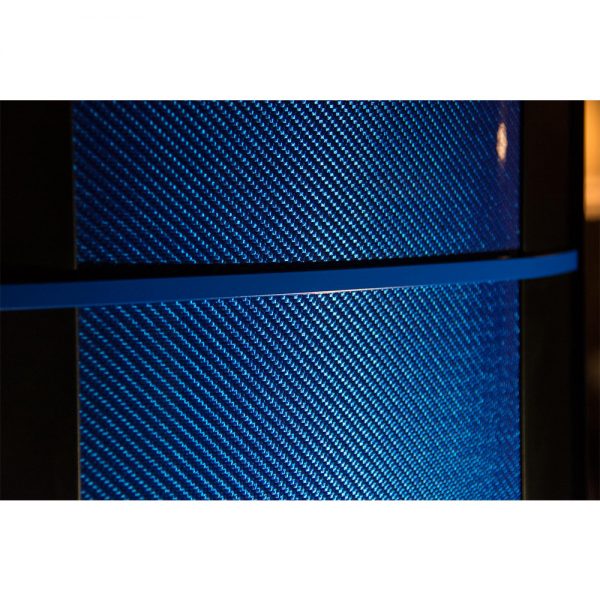 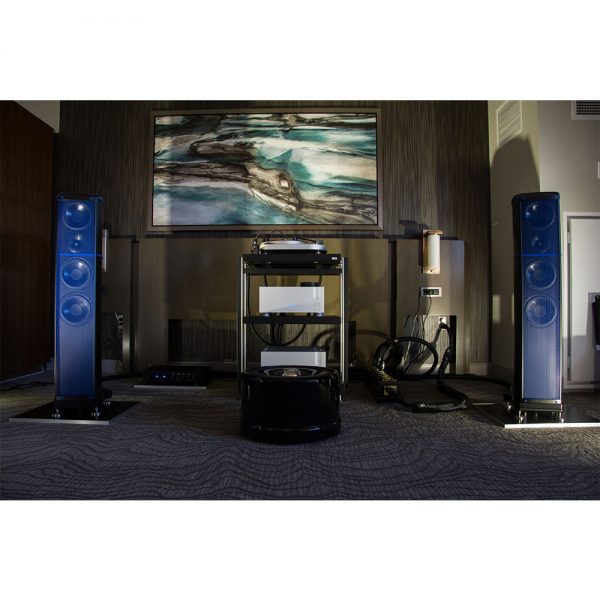 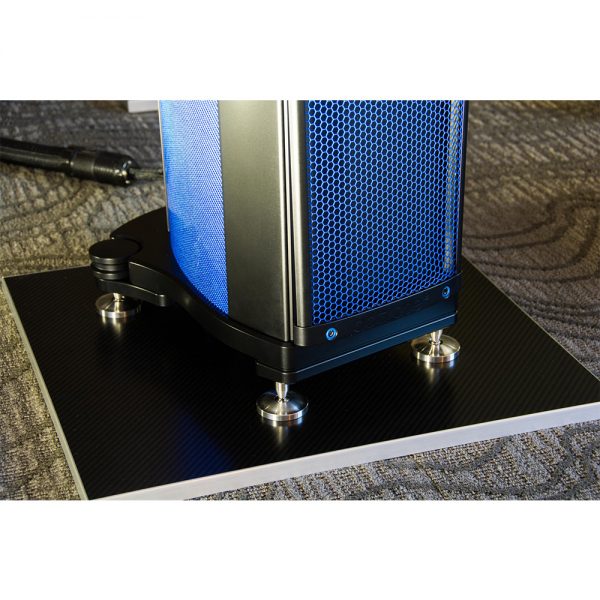 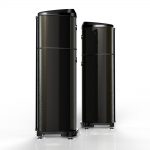 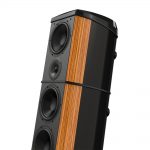 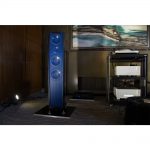 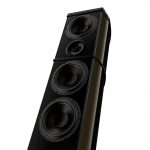 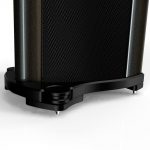 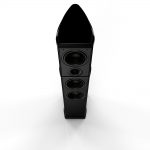 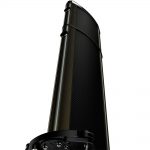 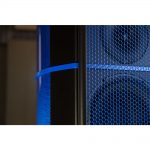 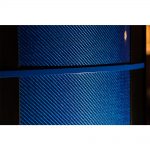 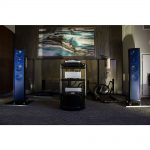 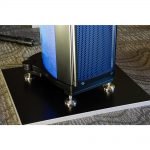 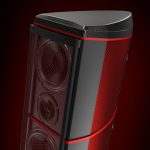 The name A.C.T. is an acronym for ‘Advanced Composite Technology’ – it is a reference to the carbon fibre composite technologies upon which the Wilson Benesch brand was founded and subsequently has become synonymous with. The A.C.T. acronym was used when naming the company’s first loudspeaker the A.C.T. One in 1991 and appeared subsequently in the A.C.T. Two, A.C.T. and A.C.T. C60 loudspeakers.

The A.C.T. One Evolution therefore follows a long line of speakers, embodying the heritage of the Wilson Benesch brand and a now classic A.C.T. design. The characteristic sloping, curved A.C.T. top that was revolutionary in the original design remains, but like the C60 before it, the top is now manufactured from carbon fibre. Similar physical proportions have been retained, however the A.C.T. One Evolution has departed entirely from the traditional drive unit topology used in the previous iterations of the design and now incorporates the Troika System which has been taken directly from the flagship Eminence loudspeaker. This revolutionary new topology, combined with the latest state-of-the-art Wilson Benesch Tactic II drive technology sets the design apart from the A.C.T. designs which precede it.

This heritage plays a significant role in how the speaker sounds. Some enthusiasts that have studied the lineage use the analogy that perhaps the A.C.T. One Evolution is to Wilson Benesch what the 911 is to Porsche. A design that has been slowly honed, improved, evolved over many generations. Worked on by many talented people over decades of paying attention to the finest details, receiving customer feedback, incorporating new technologies as they become available, constantly refining the design to the point where the product becomes an icon.

When you sit in front of an A.C.T. One Evolution, you are experiencing the results of that lineage, the outcome of thousands of hours over many years that people have spent fussing over all aspects of the design (most that you can’t see). There is an immediate sense that the speaker is very accomplished, a serious, mature speaker made by people who have been doing this for a long time. In the true Wilson Benesch tradition, this speaker simply disappears and allows the music to flow, imparting very little of its own character into the presentation, which even at this level is very rare.

Although there are a few models in the Wilson Benesch range that take these design elements to a more extreme level, the A.C.T. One Evolution can be considered a true destination speaker. It is a bold statement of expert engineering, manufacturing and craftsmanship that now defines Wilson Benesch. A pure high-end audio thoroughbred. 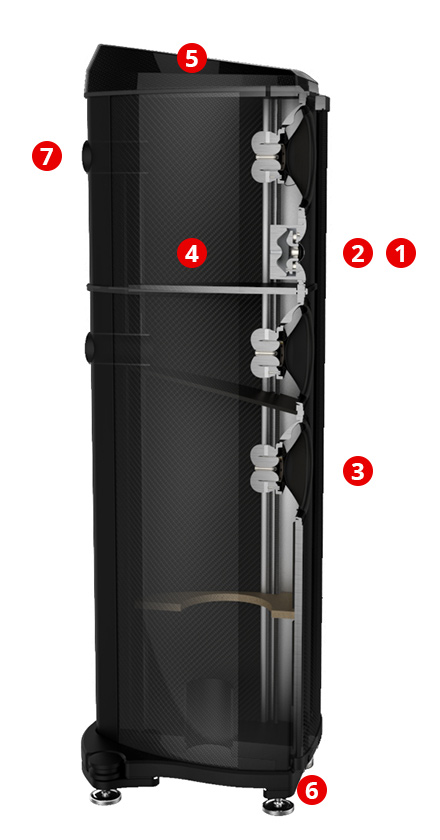 In the midrange, Wilson Benesch introduces technology taken directly from the flagship Eminence loudspeaker. A two-part cabinet construction sees a single 7” upper midrange Tactic II drive unit and Semisphere Tweeter operate in a volume-optimised enclosure, allowing acoustical roll off of the drive unit. Directly below the Semisphere Tweeter in the main enclosure, a 7” lower midrange Tactic II drive unit resides – placing the Semisphere at the heart of the midrange design in a formation known as the Troika System.

The reduction in complex crossover elements translates directly into a highly articulate and natural midrange sound and marks a significant advance in the performance of the midrange to Wilson Benesch.

At the centre of the Troika System is the Hybrid Dome Technology Semisphere Tweeter – a highly engineered solution for high frequency sound reproduction. As the pioneers of carbon fibre composite technology, Wilson Benesch drew upon more than two-decades of knowledge and expertise to create a hybrid diaphragm for the Semisphere consisting of carbon fibre and silk. The hybrid dome is a direct departure from hard dome technologies now used as standard across the industry for wide bandwidth tweeter design. The natural sound produced by the Semisphere dovetails directly into the open sound of the midrange to create a highly integrated system, with stunning soundstaging and detail.

The A.C.T. One Evolution bass frequencies are delivered by a 7” Tactic II Bass Drive Unit. Like the midrange drive units, it features a powerful Neodymium rare earth magnet encased in a motor assembly developed with the Sheffield University to optimise flux across its geometry. This exotic magnet design is combined with a streamline basket and a light stiff Isotactic Polypropylene cone to create a powerful bass drive unit. By installing the Tactic II Bass Drive Unit inside the 26-litre lower enclosure of the A.C.T. One Evolution, maximum dynamics, deep powerful bass frequency response and precision are achieved.

Standing at 1.2m (47”) in height, the A.C.T. One Evolution is a striking combination of precision-machined alloy baffle, alloy side panels and the Advanced Composite Technology ‘A.C.T.’ Monocoque. The A.C.T. Monocoque is a geometrically optimised carbon fibre composite structure that exhibits industry leading resonance damping and signal-to-noise characteristics. The inherent stiffness of the A.C.T. Monocoque allows the removal of complex internal bracing commonly used to control cabinet resonance.

The A.C.T. One Evolution is a distinctive Wilson Benesch design drawing direct references to the company’s multi award winning A.C.T. loudspeaker lineage. Its sculptured, curved and sloped top is a direct descendant of the original A.C.T. One loudspeaker. Launched in 1995, the original A.C.T. One was a revolution in loudspeaker design and its top was the first example of a sloping design in the industry. The modern equivalent has been manufactured using the same highly advanced carbon composite tooling used to create the loudspeaker cabinet, the A.C.T. One Evolution top is a masterpiece of engineering.

First introduced in the kinematic bearing design in the Wilson Benesch A.C.T. One Tonearm in 1991, the bearing was designed on the principles of kinematic coupling. The fundamental principle of kinematic coupling is to selectively eliminate each one or all of the six degrees of mechanical freedom that any physical body has.
In the A.C.T One Evolution, three 14mm steel threads, tipped with a 6.75mm steel ball, meet with three 6.75mm steel balls, held captive inside the floor protector. This creates a triangulated structure, with a contact point of less than 1mm2 , which provides high-integrity, stable location of the loudspeaker.

The A.C.T. One Evolution features two midrange ported enclosure, with a port directly behind both the upper midrange and lower midrange/bass drive units. In addition, the A.C.T. One Evolution has a large 80mm diameter port terminating directly underneath the speaker. Each port has been tuned optimally through adjustments to both their length and the diameter of the ports, in accordance with the specific characteristics of the Tactic II Drive Units. In general, this allows an extension of the frequency response of each drive unit, in particular in the bass register.

SoundStage! Australia, Edgar Kramer, 2021
The Wilson Benesch A.C.T. One Evolution is an intellectually stimulating loudspeaker. I mean that both in terms of its intelligent engineering across all aspects of its design and in the way it presents music. It has a way of engaging you in a manner that makes you think about what you’re listening to. Other designs may draw you in and engulf you in sheer emotive bliss. The A.C.T. One Evolution is capable of that too, however, it also engages your neurons on a cerebral level. At least that was my experience. Exceptional engineering aside, it’s also an aesthetically attractive design which has been meticulously constructed and flawlessly finished. The A.C.T. One Evolution loudspeakers force you to take notice. That is a lot to think about. And feel. Go on, engage your senses…
Read Review
Music Emotion, Werner Ero, 2019
Trying to describe the sound of this speaker with typical audiophile parameters is of no real use because of the almost 1:1 sense of scale and rich live experience. Everything is there and everything is in perfect balance. Just like it needs to be, but is seldom experienced with hifi… Together, music and system form a wonderful unity and it makes me think this is how high end music playback should be sounding, totally forgetting all technicalities and be one with the music.
Read Review
The Absolute Sound, Alan Sircom, 2015
The A.C.T. One Evolution is also extraordinarily detailed from top to toe. These are great loudspeakers for musical analysis, for listening into the music and extracting both a lot of information and – more significantly – a lot of fun. Play something like Bach’s Art of Fugue [Emerson String Quartet, DG] and you need to hear both the cerebral and the visceral. This should be extremely precise and very clearly a string quartet, but it should also come with a sense of musical joy and vivacity, taking the birthplace of modern music and making it their own. Less detailed loudspeakers fail at one of these two aspects, either making the precision or the fun-factor disappear. Wilson Benesch’s A.C.T. One Evolution combines both elements of the recording with lithe elegance.
Read Review
Hi-Fi+, Alan Sircom, 2015
The A.C.T. One Evolution is the distillation of all the engineering and materials science development that Wilson Benesch can throw at a loudspeaker… where the original A.C.T. One began ‘tabula rasa’, the A.C.T. One Evolution draws upon drive unit technology and high compression cabinet construction derived from two decades of loudspeaker design…
…I don’t want to get carried away by the bass. There is a lot more to this loudspeaker than bottom end. It’s just that the loudspeaker does bass so well, and so deep; that unbraced cabinet makes it TARDIS like and far bigger on the inside than you’d expect and that means more cabinet volume and that means more bass – but the level of control the A.C.T. One Evolution has over that bass is insane
Read Review
LP Magazine, 2019 (German Language)
Read Review