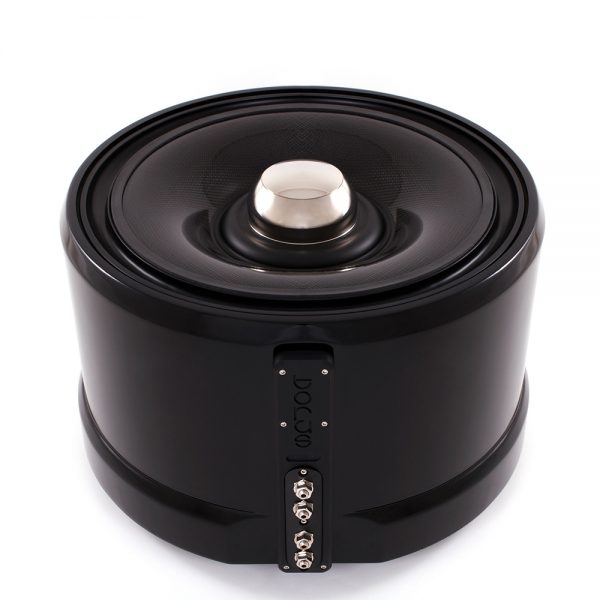 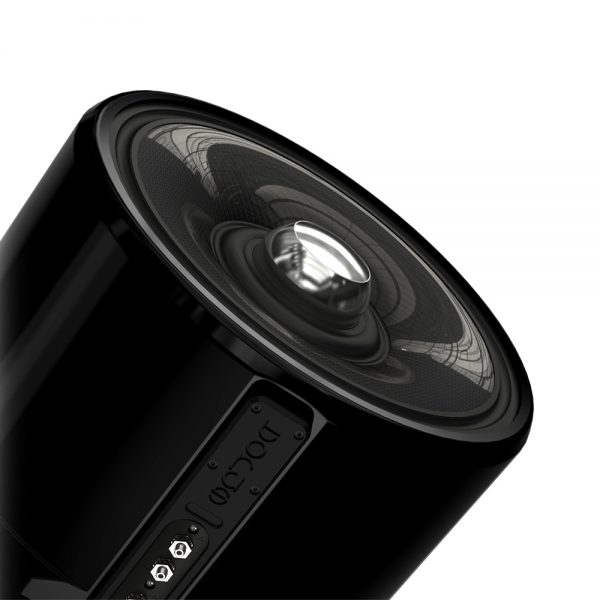 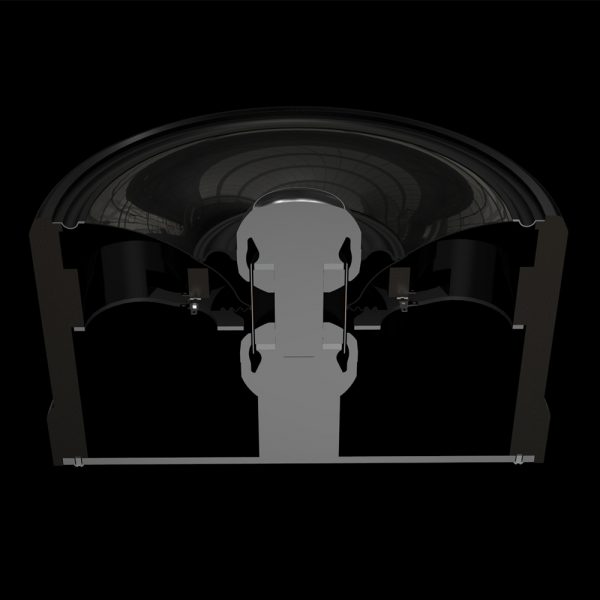 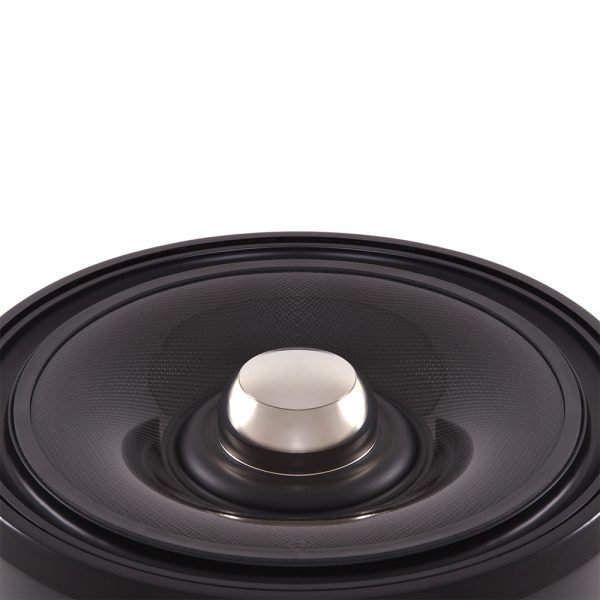 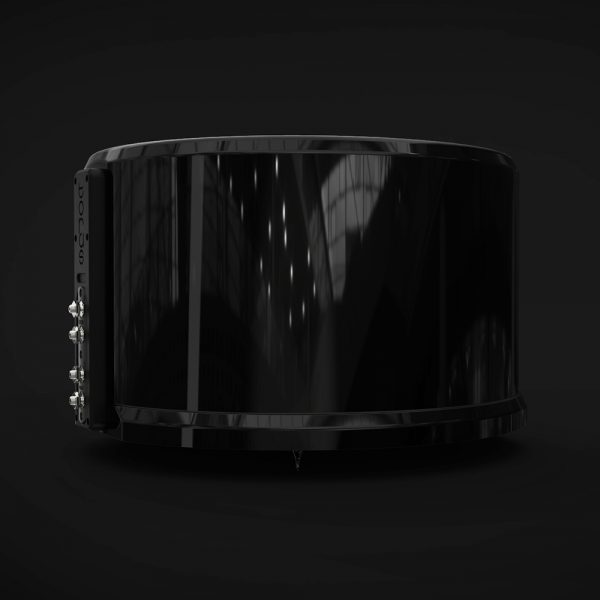 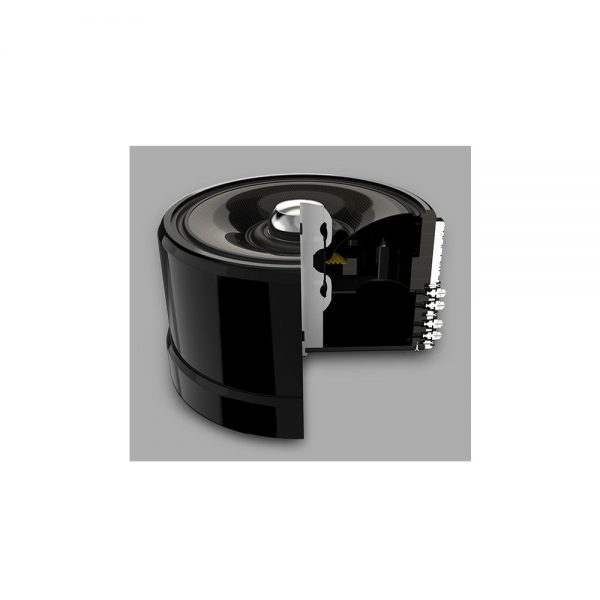 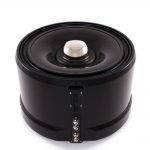 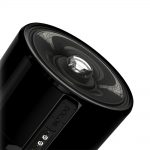 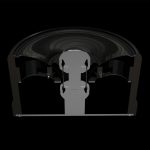 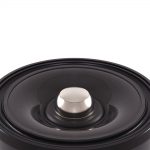 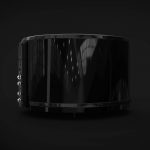 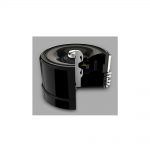 Following an intensive 3 year R&D project, Wilson Benesch realised the Torus Infrasonic Generator and the Torus Amplifier. This landmark design is one of the most important in the company’s history, gaining recognition with numerous awards worldwide. The Torus places an 18” light-weight, super-stiff, multi-axial Carbon Fibre cone at the end of a phenomenally powerful push-pull motor.

At the heart of the Torus is the core, a formidable 16kg precision machined steel column, with the two large rare earth magnets of the push-pull motor either side. The core is the central component and reference point for every other component within the design acting as both a high capacity metal heat sink and a structural component that conducts all structural borne resonance directly to earth with zero transference to the outer enclosure.

The laws of physics dictate that moving a large volume of air in a split second demands a large moving surface area. This principle immediately rules out the possibility of using a small diameter driver to produce low frequency sound. The complexity this introduces is that larger diameter cones require greater stiffness to maintain the temporal resolution of smaller drivers. Carbon fibre is renowned for its high strength- to-weight ratio, and this property makes it the ideal for the Torus cone. A novel multi-axial carbon fibre weave developed by the company is used to create a phenomenally stiff, light and highly damped diaphragm. Thus, despite its relatively small size, the Torus boast an 18” diaphragm, capable of displacing huge volumes of air instantaneously. Transients are handled with ease, giving rise to the chest moving kick drum and attack, impossible to achieve with a conventional subwoofer design. 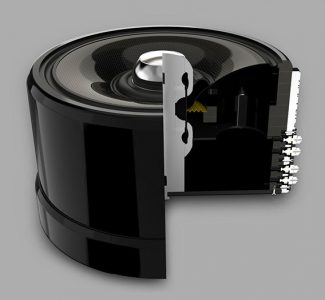 In the Torus where huge amounts of low frequency energy are generated, thermal efficiency is a critical concern. In addition to the steel core acting as a highly efficient heat sink, Wilson Benesch collaborated with Oxford University to create a Boron Nitride Coil. Boron Nitride offers the high electrical conductivity required by any coil design, but its thermal conductivity supersedes that of copper by several orders of magnitude.

Vibrational energy is very harmful to audio electronics even in small quantities. This is why audiophiles often go to great lengths to apply high-performance racks and isolation devices to their systems in order to achieve the best possible sound. Yet many of those same people use subwoofers where the subwoofer amplifier is housed in the same enclosure as the driver and mere millimetres away from ground-shaking resonance! For ultimate performance, the Torus system separates the passive speaker in one enclosure and the amplifier in another. A specially designed Torus amplifier has been designed to drive the Torus speaker optimally while being located away from the severe low frequency energy.

A system’s bass response is crucial in achieving a realistic, engaging, enjoyable sound. The bass adds weight and plays a powerful role in how we hear harmonies. When we hear several notes played at the same time, we hear them all relative to the lowest sounding pitch — the bass note. It locks our mind into the beat and the rhythmic structure of the music and bass is often described as being felt as much as it is heard. Aside from having the right amount of bass, for music to sound real the bass has to be deep, fast and tuneful. The bass should be a cohesive part of the whole sonic picture and indiscernible from the music which means that it needs to be tight and as fast as the mid-bass frequency drivers. Otherwise, it can be heard as a separate entity to the whole. For many reasons, this is not often achieved in high end systems as it is difficult to do. The elegant and minimal toroidal shape of the Torus is a testament to the use of purist geometry to achieve this ultimate aim. The Torus is a genuine evolution in design that has resulted in a paradigm shift in our expectations of low-frequency sound reproduction. Simply the most natural sounding bass reproduction available today.

The Wilson Benesch Torus system consists of a Torus Infrasonic Generator ($9,500) and a specially designed Torus Amplifier ($6,900) to drive it.

Why not call it a Subwoofer?

The first and most important design element of the Torus, is that it is not based upon the woofer, which is why Wilson Benesch do not call it a subwoofer. In fact, the Torus removes the concept of woofer design entirely from the equation. While the Torus motor converts electrical energy from the amplifier into kinetic energy in the same way as a regular woofer, the fundamental difference comes from a push- pull motor design. Unlike a common subwoofer that relies upon high hysteresis suspension to reset the cone to its resting point, the cone position of the Torus is dictated at all times by electromagnetism. This enables the Torus to reproduce low frequency sound with a stunning degree of precision and allowing the reliable communication of transient low frequency information. The powerful push-pull motor is capable of handling 500 amperes, converting over 1000 watts of electromagnetic energy into kinetic energy, generating huge compression and decompression forces.

The Absolute Sound, Roy Gregory, 2013
The wrong side of £6K might seem like a lot of money for a small increase in bandwidth for what might already be considered a full-bandwidth design. But that £6K will turn the £55K you’ve already invested in the Cardinals from seriously impressive to somewhere beyond your wildest dreams. If you want a system that really can sound live, that lets you forget the means of reproduction and simply lose yourself in the music, the Cardinal/Torus combination does just that. It does it without fear or favour, bringing out the best in recordings rather than fastening on their weaknesses. What the Torus does for the Cardinal is allow it to let go – in the best possible sense. As a listener, it will do the same for you, which places its contribution pretty much beyond price. The Cardinal is great, the Torus is great too – but together, the whole is so much greater than the sum of the parts.
Read Review
Hi-Fi+, Roy Gregory, 2008
Adding the Torus transforms the timing and integration of the instruments. The picked melody is more fluid, quicker and more sinuous, the snare more snappy and insistent, the space around the instruments much more apparent, with walls and a floor. Suddenly the music takes on a feeling of underlying urgency that dovetails perfectly with the lyrics.
Read Review
The Absolute Sound, Jonathan Valin, 2008
Strokes of genius are rare in any field, but I think Milnes’ Torus qualifies” …… “designed to reproduce acoustic music with the highest fidelity, and separately and in combination both do just that. I have never heard a subwoofed system that is more of a piece or (with the right sources) more consistently “foolyou” realistic—or a subwoofer that does less sonic damage to the sound of a superlative main speaker.
Read Review
Tech Radar, 2007, 4.5 Stars
The biggest compliment we can give the Torus is to say it’s musical: it’s fast and tuneful, delivering precise doses of bass with a surgeon’s skill. Mate the Torus with any top-quality stand mount, or most floor standers for that matter, and you’ll be greeted by a sound of immense authority and integrity once properly set up.
Read Review