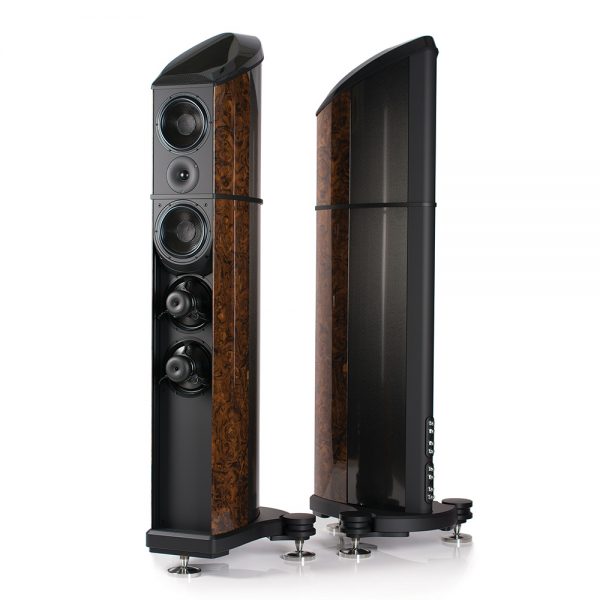 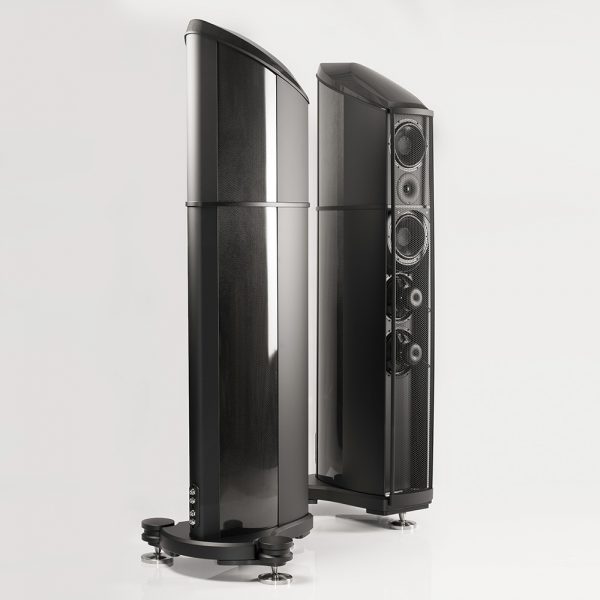 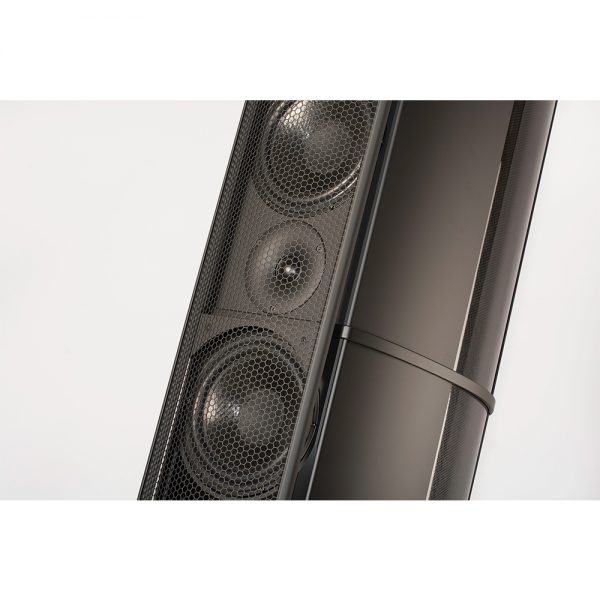 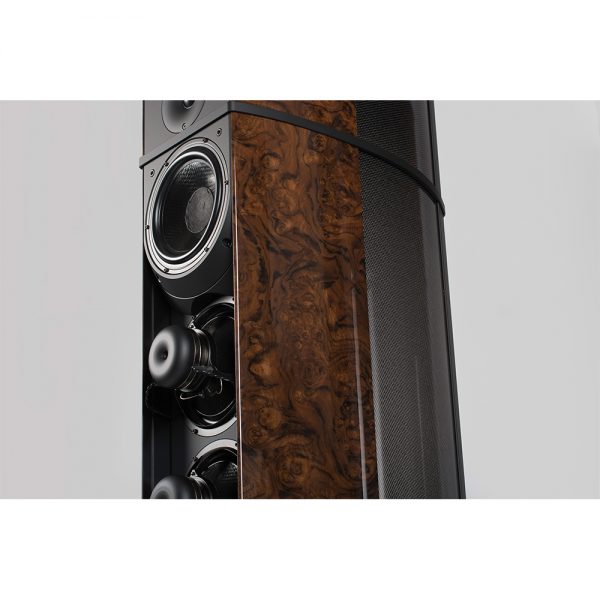 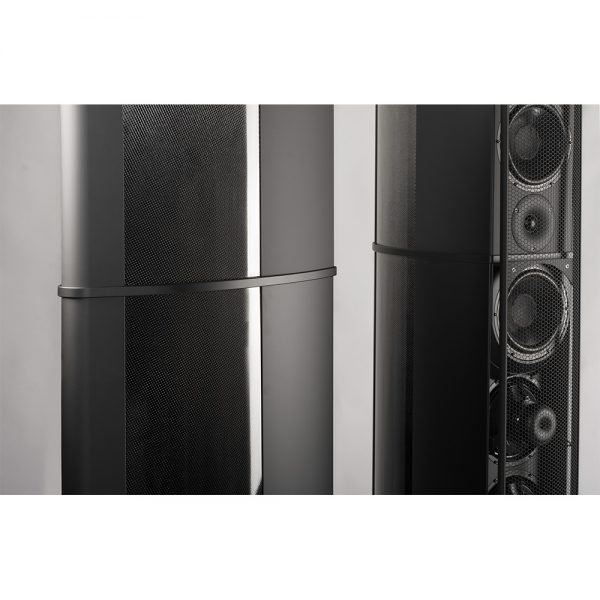 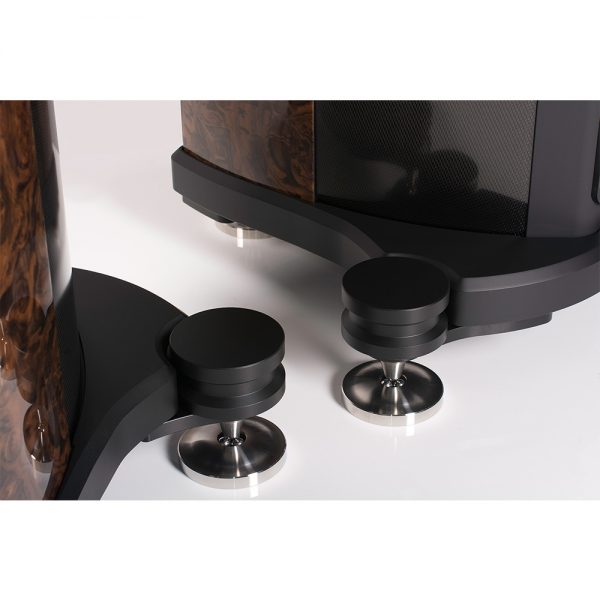 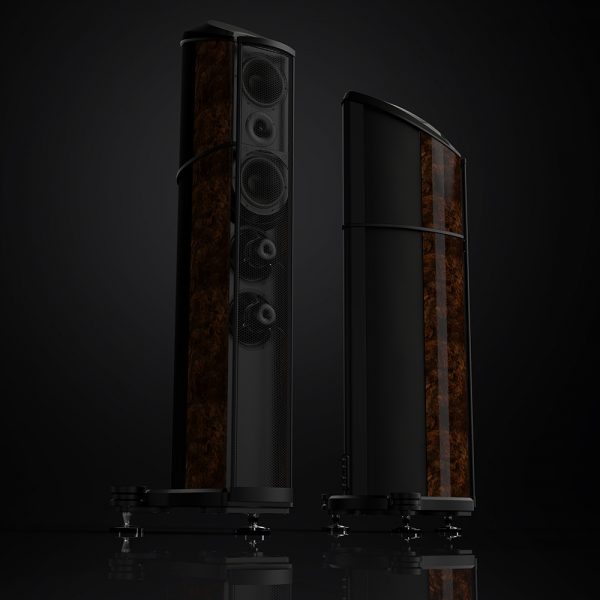 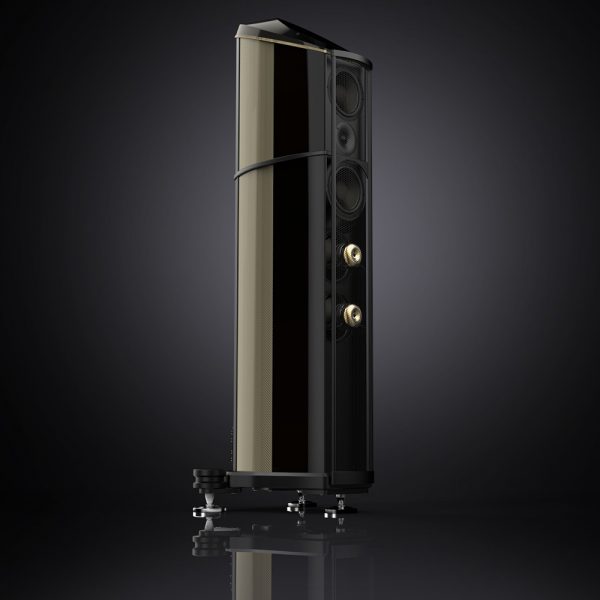 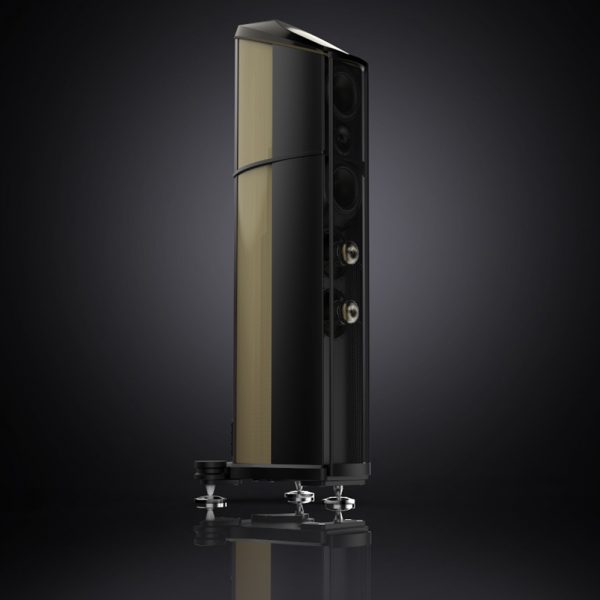 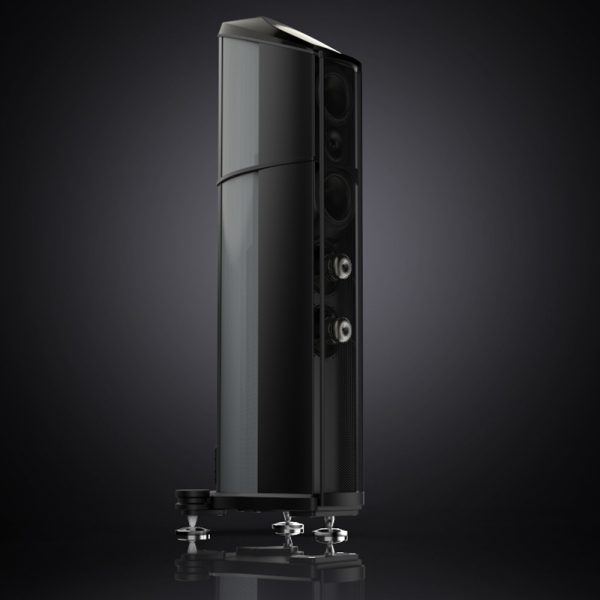 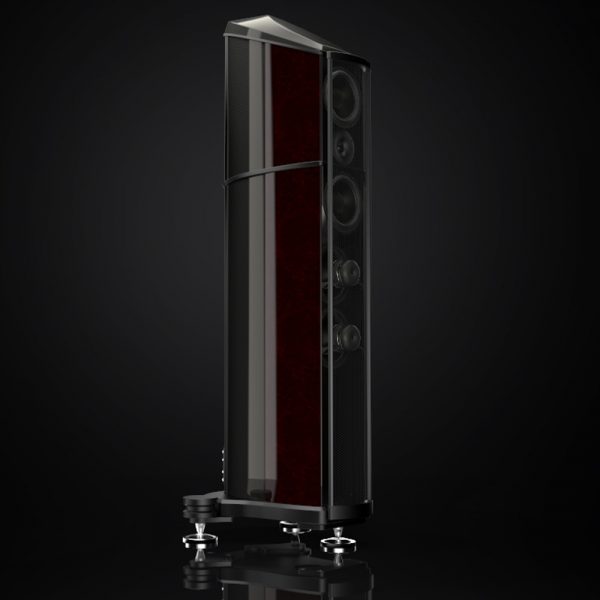 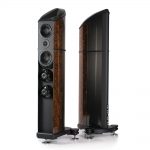 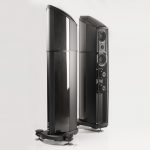 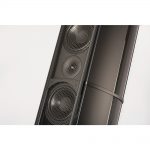 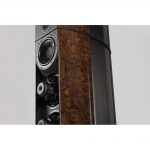 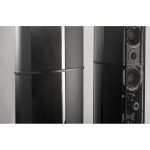 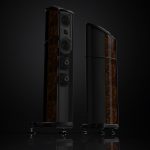 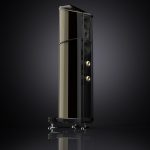 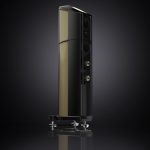 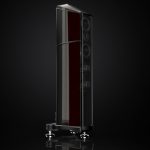 The Wilson Benesch Resolution is a formidable model in the ‘Geometry Series’ because of its ability to create a sonic landscape that feels real, palpable and immersive. It is equipped with the latest Wilson Benesch drive technologies that have been designed, developed and manufactured in-house by the company’s design team. Both the Tactic-II dynamic drive unit and the Semisphere Tweeter are built using powerful NdFeb magnets, that are located within highly engineered, low-profile alloy structures designed to extract maximum power from the exotic magnets.

The Tactic-II drive units are constructed from Isotactic Polypropylene and the is Semisphere features a Silk-Carbon hybrid. The choice of materials within the membrane of the drive technology is critical to the character of the Resolution, providing an intelligently considered balance of stiffness and damping characteristics. The Resolution is capable of producing a wide bandwidth frequency response from 30Hz to 30kHz, whilst remaining transparent and integrated across the band, suspending belief and allowing the listener to disappear within a wide-open soundscape. The Resolution’s unique enclosure is formed from a carbon fibre composite monocoque and precision machined metal-alloy components.

Every Geometry Series loudspeaker is handmade to order. The sculptured carbon fibre top and carbon fibre enclosure combines with an aerospace Silk Black baffle and foot. The Resolution can be engineered, with a range of bespoke high gloss polymers, stunning natural wood veneers and P1 coloured carbon fibre finishes to give the loudspeaker an identity unique to its owner.

Beyond the stunning craftmanship and technology is the real value of the Resolutions – their performance as a reference loudspeaker system. Some audiophiles talk about the phenomena of the ‘momentary suspension of disbelief’, meaning a moment when you are listening to music and you forget that you are listening to a system and you feel totally engaged with the music, as if you were at a live event. Others call it a ‘letting go’. For a system to achieve this level of believability, it needs to present the music in a way that your mind moves away from the awareness of your body and gets immersed in the music. Partnered with the appropriate source & electronics, the Resolutions enable these experiences. A work of art visually and sonically.

The midrange frequency band is where the human ear is most sensitive and thus was a key area of R&D during the development of the Cardinal. The resulting Troika System is a unique drive unit topology that is central to the success of the Resolution loudspeakers lucid and highly transparent soundstage. The topology sees the Semisphere Tweeter flanked by a lower midrange / bass Tactic II driver above and an upper midrange Tactic II driver below. The Troika System technology has been used in other Geometry Series designs.
Not only does the Resolution have dedicated upper and lower midrange drive units, but these drive units are also acoustically tuned by a combination of cabinet air volume and individually specified drive unit design. Thus in the Cardinal, both midrange drive units are coupled directly to the amplifier with no crossover components in the signal pathway, while there is a Semisphere has just a single inductor on it. The midrange is therefore free of any phase anomalies or signal degeneration associated with complex crossover designs.

Designed and manufactured in house, the Semisphere has been developed to match the Tactic II Drive Unit, creating seamless integration across the mid-high frequency band. At the heart of the Semisphere is the Silk-Carbon Hybrid Dome. The hybrid dome tweeter, retains the natural sound of a soft dome tweeter, remaining free from sibilance. However the addition of carbon fibre through a proprietary technique, allows the Semisphere to remain flat through the frequency range to 30kHz. Built around the dome is a combination of highly engineered components, which have been precision machined in house at Wilson Benesch. At the front a curved front plate creates the ideal launch surface for high frequency sound. To the rear of this is a complex motor front and rear plate that hold a ring of six powerful rare earth magnets. The design allows optimal venting and allows the Semisphere to remain cool during extended use.

There are no transient delays in nature – when a singer sings, or a drummer strikes you hear the sound almost instantly. But when a drive unit tries to replicate this sound from a recording, the transient response time, although minute, is easily detected by the ear and the brain. When designing a drive unit, it is critical to reduce the transient response time as much as possible. Any delay informs the brain that what is being listened to is in fact a recording and not a real human voice or instrument. Wilson Benesch developed the original Tactic drive unit and subsequent Tactic II drive unit around this philosophy. We employed a light cone material, with phenomenally powerful NdFeB Rare Earth Magnets, with a highly evolved motor geometry to optimise flux. The result was a dynamic drive unit that could excurse through the in and out range of its movement during use very quickly and under a high degree of control. The original Tactic design was described as “lightning fast” in the first test reviews.

Following the same principles of the A.C.T. monocoque, the carbon fibre top in the Endeavour and Cardinal have been designed firstly to damp internal cabinet born resonance and secondly to negate standing waves interacting with the loudspeaker surface. The overall effect is a vastly improved signal-to-noise ratio. The Endeavour top, along with the Cardinal top, is perhaps one of the most complex carbon fibre forms ever created by Wilson Benesch. Developed using industry standard 3D CAD / CAM software, the moulding tool was milled from one solid block of aluminium to tight a high degree of accuracy. Subsequently the resin transfer moulding technique perfected in the A.C.T. monocoque is employed to create a beautifully sculptural carbon fibre form with no compromises in terms of its function.

The Resolution features a unique aluminium profiled baffle to house the three drive units that comprise its Troika System. The baffle is machined from two solid billets of aluminium, to create a beautiful curved, stepped baffle feature at the front of the Resolution. As standard throughout the Wilson Benesch reference loudspeaker line, Geometry Series, the Resolution baffle is constructed entirely from aluminium that has been precision CNC machined in house. But, alike with the Isobaric Drive System sub-baffle in the Cardinal, the 4kg Troika Baffle in the Resolution is a highly engineered multi-profiled component that plays a crucial role in the function of the loudspeaker. In the Resolution, the Troika Baffle is perhaps a feature that most strongly defines the loudspeaker visually from its stable mates.

The enclosure exerts a considerable influence over the sound of the complete system. A moving coil driver radiates energy by vibrating a diaphragm assembly whose reaction will simultaneously excite the loudspeaker chassis causing it to vibrate in sympathy. The chassis must therefore be ridged and highly damped to prevent it from moving and in turn stop the chassis from dissipating energy as unwanted acoustic output.
Numerous examples of chassis damping are evident in the Endeavour. The A.C.T. Monocoque alone is the most highly damped enclosure ever manufactured. However, Wilson Benesch also employ a highly engineered base board in the Endeavour. This component is hewn from a solid billet of aluminium, creating a ridged structure to which the Isobaric Drive System mounts and also a housing for the A.C.T. Monocoque.

In the Isobaric Drive design, Wilson Benesch extend the philosophy of the Tactic a step further. By deploying two Tactic II drive unit, conventionally connected, with the motor coils wired in parallel, the composite dual driver has the following characteristics if compared with a single device: twice the moving mass, half the compliance, half the impedance for which it draws twice the input current and hence double the power. In layman’s terms, the Isobaric Drive works harmoniously in a push-pull formation, dividing the load of creating low frequency sound across two powerful drive units. By sharing the load of the work, the Isobaric Drive can produce extremely low bass, while remaining highly dynamic and perfectly integrated with the midrange drive units. In the Resolution, Wilson Benesch have deployed a total of 4 Tactic II drive units across two independent Isobaric Drive systems in a clamshell formation.

A sophisticated three-layer composite structure comprised of carbon fibre, high compression blast core and glass fibre. In terms of energy damping and therefore signal-to-noise ratio, the A.C.T. Monocoque exceeds with consummate ease the materials traditionally used in loudspeaker design. Wilson Benesch have optimised the A.C.T. Monocoque by creating a curved form. The geometric form of the cabinet negates standing waves by reducing the number of flat surfaces on the loudspeaker surface. Thus any sound waves interacting with the surface of the A.C.T. Monocoque are diffracted across a wide angle and thus diminished. As a result, such distortions are impossible for the ear to detect, allowing the loudspeaker to disappear within the listening space; stealth like the loudspeaker creates a wide open and life like soundstage.

First introduced in the kinematic bearing design in the Wilson Benesch A.C.T. One Tonearm in 1991, the bearing was designed on the principles of kinematic coupling. The fundamental principle of kinematic coupling is to selectively eliminate each one or all of the six degrees of mechanical freedom that any physical body has.
In the A.C.T One Evolution, three 14mm steel threads, tipped with a 6.75mm steel ball, meet with three 6.75mm steel balls, held captive inside the floor protector. This creates a triangulated structure, with a contact point of less than 1mm², which provides high-integrity, stable location of the loudspeaker.

The Absolute Sound, Alan Taffel, 2019
Rounding out the Wilson Benesch’s virtues are a deathly quiet noise floor and low overall distortion. These traits, too, add to the speaker’s sense of musical suspense, since dynamic bursts seem to come out of nowhere. Yet there is a remarkably delicate filigree to quieter passages. Through the Resolution, overtones and decays hang in the air like drifting clouds….
In sum, the Wilson Benesch Resolution is a speaker that’s full of surprises. The use of carbon fibre is surprising. The melding of this new-world technology with old-world isobaric loading is surprising. The speaker’s slender appearance is surprising, as are the unique views it affords of carbon fibre and woofer butts. Most surprising of all is the Resolution’s chameleon-like ability to change its colours to reflect the music and the recording it’s playing. This is a speaker that never gets old, familiar, or boring. It’s a speaker you really can live with over the long run.
Read Review
The Audio Beat, Roy Gregory, 2018
But, above all, it delivers a level of musical coherence and insight, a balance of the convincing and the communicative, that puts it at the forefront of current loudspeaker performance. More refined and even than most paper-coned systems, more natural and richer than most aluminium- or ceramic-coned speakers, far more expressive and engaging than the “high-tech, high-res” brigade, for all its obvious engineering, this is at heart an essentially simple and unfailingly musical device.
Read Review