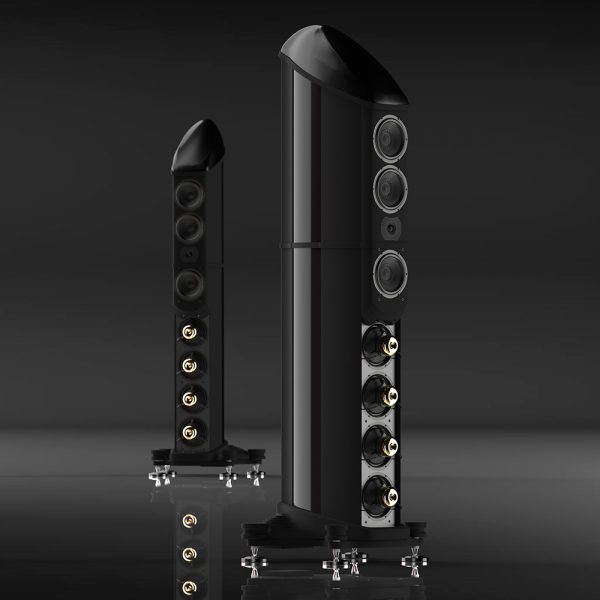 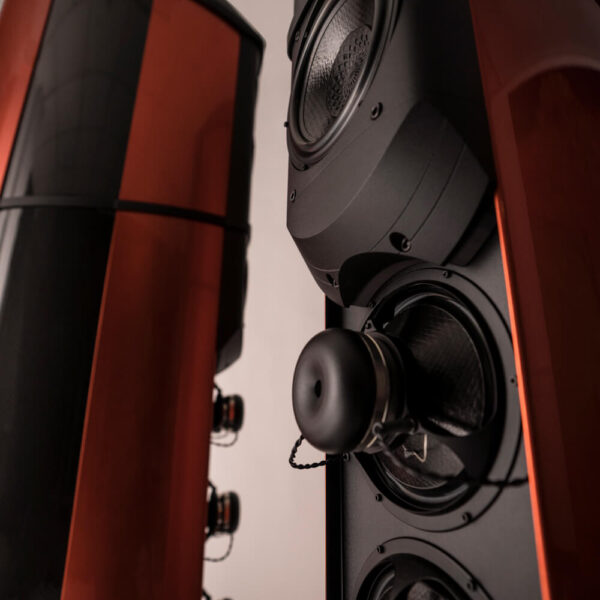 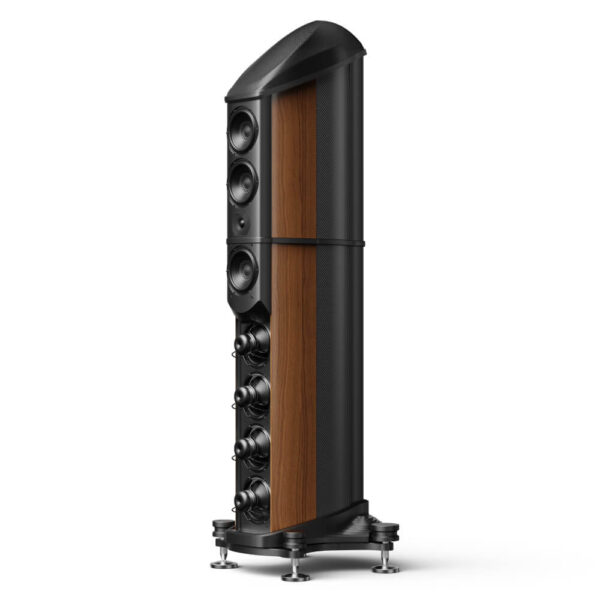 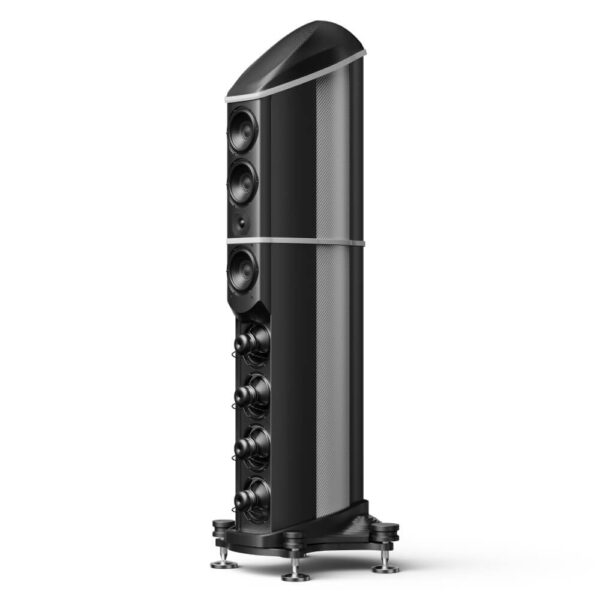 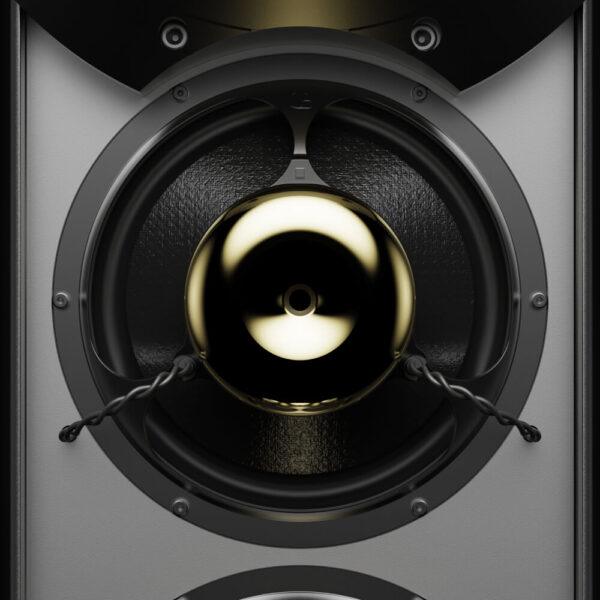 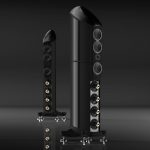 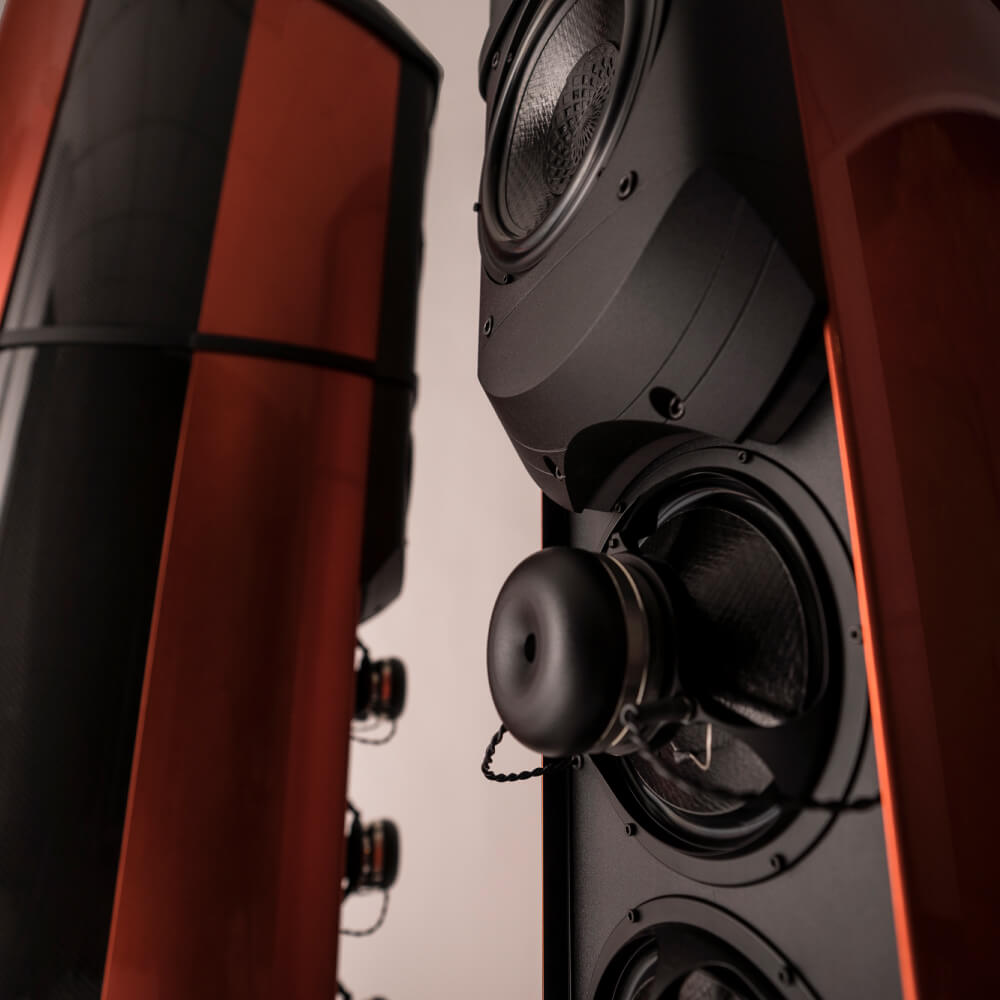 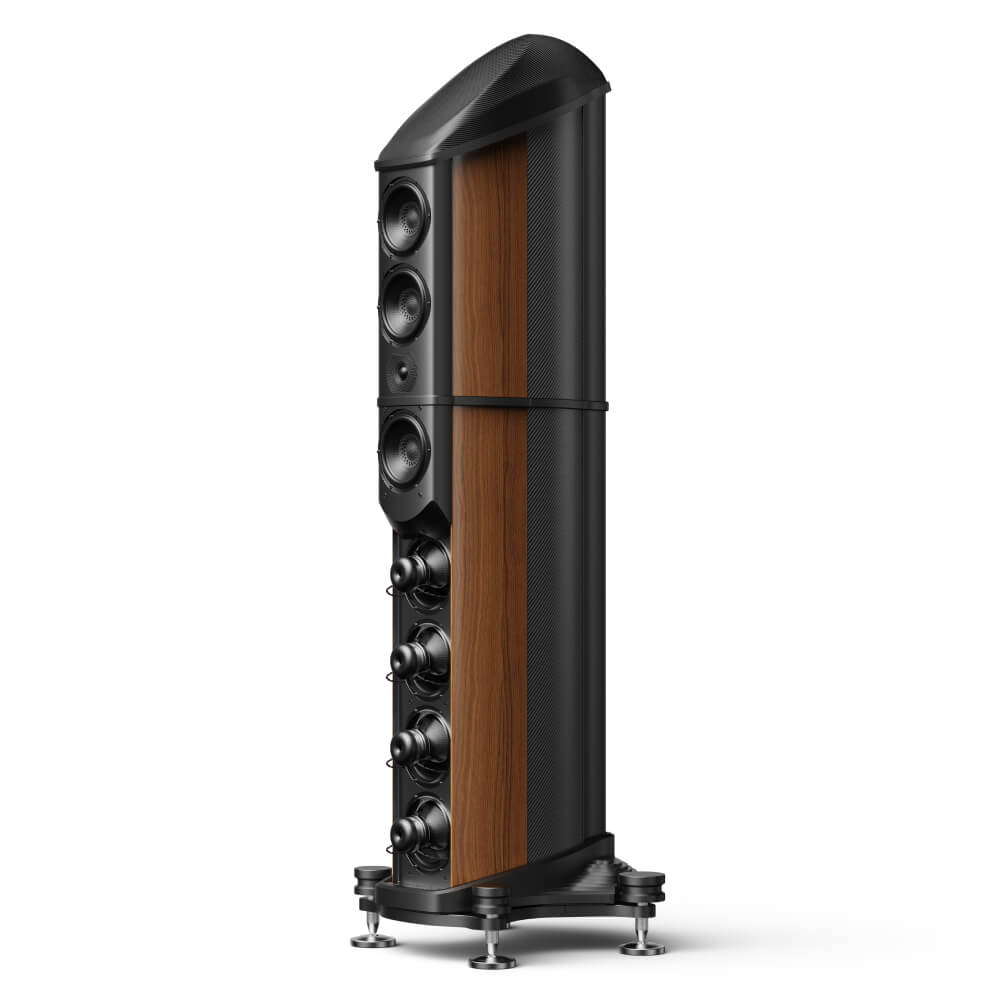 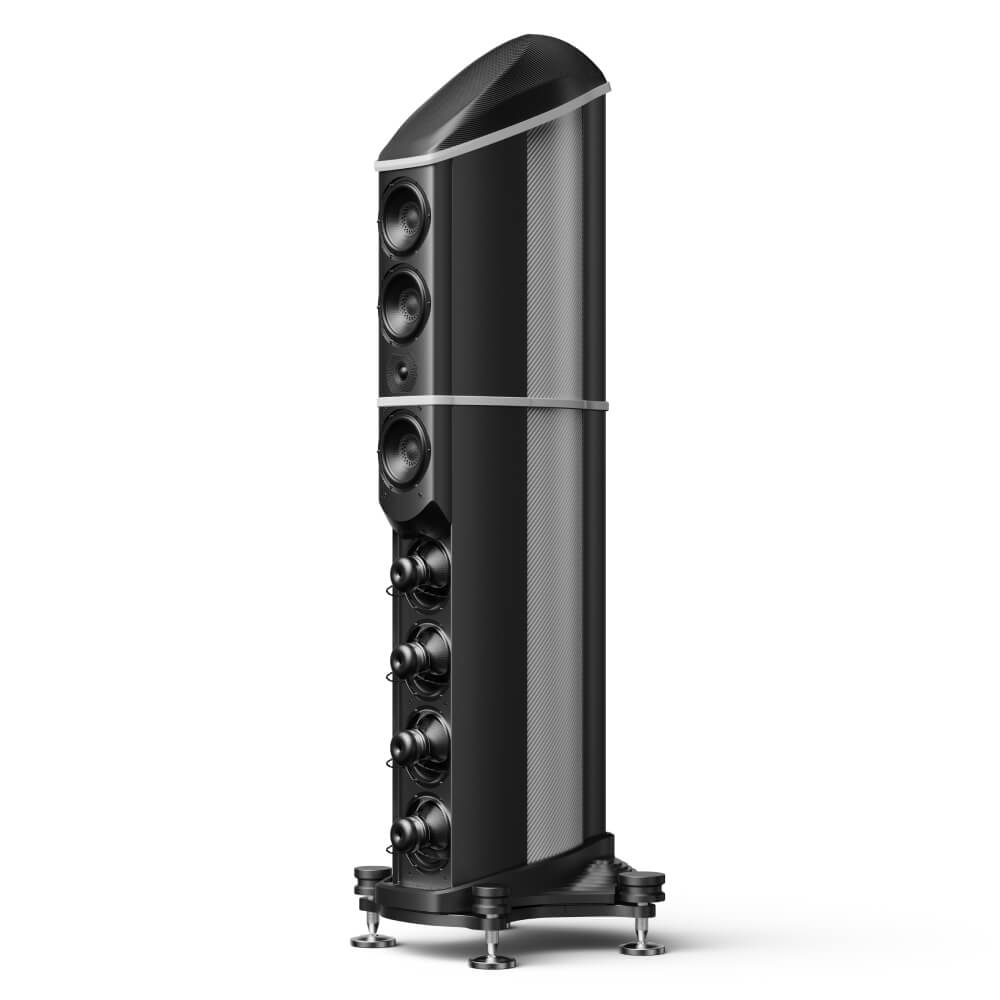 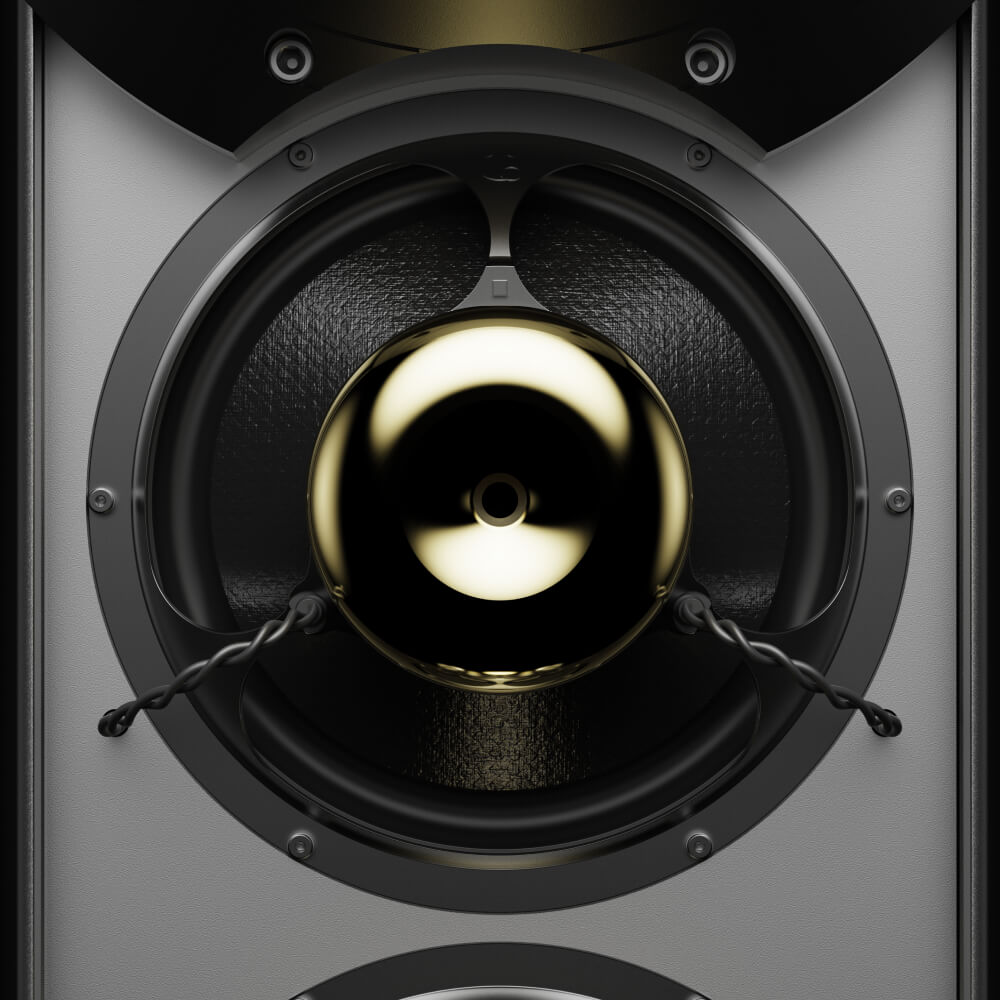 In 2018 Wilson Benesch unveiled Eminence – the most ambitious loudspeaker design in the company’s three-decade history. The Eminence became a messenger for the next generation of reference Wilson Benesch loudspeaker design, introducing for the first time the A.C.T. 3Zero Monocoque, the Tactic 3.0 drive unit and the Fibonacci Tweeter. The Eminence quickly received acclaim from the most important critics in the industry and without exception, it was identified as a landmark achievement not only for the brand but within high-end audio design.

The Eminence is the brand and series flagship, but this loudspeaker is not simply about scale; it is a remarkable achievement in product design, integrating seamlessly its ten drive units with stunning coherency in such a way that allows the loudspeaker to disappear effortlessly into the listening space leaving only the recorded artist and the listener – an amazing achievement for a product that is physically taller than most of the audience to which it plays. But the Eminence also sets a new benchmark in terms of materials and responsible product design – signalling a clear direction of travel toward renewable and sustainable solutions – a baton that as the leader in high-end audio product design and manufacturing Wilson Benesch is taking up and pioneering into the future.

There are many companies in high end audio that build large expensive statement style loudspeakers. However, there are only a handful that achieve such an extraordinary level of performance that they are considered an expression of the very best that is possible. The Wilson Benesch Eminence was awarded The Absolute Sound’s Product of the Year 2019 and also received the Golden Ear Award for 2019. Beyond the exaltations of the audio press, the Eminence is being installed as the speaker of choice in uncompromising reference systems around the world by audiophiles who simply want the best equipment available.

Wilson Benesch speakers have always aspired to ‘sonically disappear’. This means that the influence the actual loudspeaker has on the musical performance is minimised so that all the listener experiences is the music and ONLY the music. No speaker induced artefacts or signatures. Ask any experienced audiophile and they will tell you that this type of speaker sounds like this and this brand sounds like that, etc, etc. The Holy Grail of loudspeaker design is to create a speaker that ‘gets out of the way’ and simply energises the room with an accurate, faithful, realistic and palpable recreation of a musical event that completely engages the listener. The Eminence is the unparalleled embodiment of this experience.

In his famous review of the Eminence, The Absolute Sound’s Robert Harley pays the greatest complement a reviewer can make about a loudspeaker: “The best way to describe the Eminence is that it’s like listening to music through an open window rather than through an electro-mechanical device.” 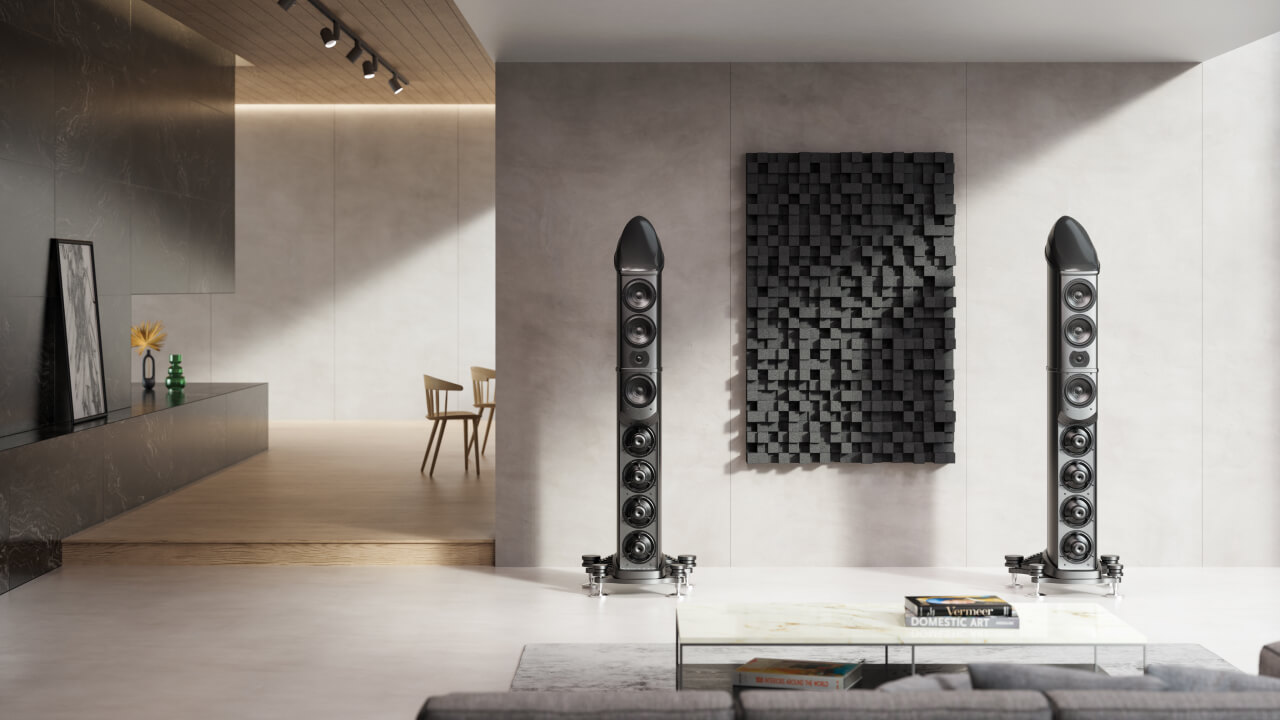 The new A.C.T. 3Zero bio-composite Monocoque is superior to its predecessor both in terms of damping and stiffness by orders of magnitude. Furthermore, it features a variety of natural materials that are derived from sustainable and renewable sources, realising Wilson Benesch’s goal to create more natural, renewable and sustainable materials technologies. In terms of acoustic performance, there is simply no other cabinet material used in speaker production today that comes close to this revolutionary material. All data is verified and measured through Wilson Benesch’s academic partner in the SSUCHY Project, the FEMTO Institute in Besancon France.

Wilson Benesch fit a beautifully sculptural carbon fibre composite top to its reference line loudspeakers. The forms are inspired by natural, organic shapes, curves and free flowing lines found in nature. The carbon fibre tops are extremely complex forms are created using a combination of hand sculpting in clay which are in turn measured using a laser and in turn loaded into advanced 3D digital computer aided design (CAD) software at Wilson Benesch. By importing data in this way, Wilson Benesch are able to use powerful software algorithms to further optimise the 3D form before manufacturing. When a longitudinal sound wave strikes a flat surface, sound is reflected in a coherent manner. However, the reflective nature of a structure varies according to the shape of the surface. Uneven surfaces will diffract sound wave energy, rather than reflect it directly with little reduction in the energy of the sound wave which it perceived as colouration in the HIFI system. Therefore, the complex ‘stealth like’ form is critical to the performance of the loudspeaker. By removing any flat, reflective surfaces and creating a highly complex structure, any reflective sound energy is scattered. This diminishes its energy and also avoids standing wave patterns within the listening space that are easily detected by the human ear as distortion or colouration.

The structure at the centre of the diaphragm plays a critical role in the behaviour of the drive unit. In the Tactic 3.0 driver, Wilson Benesch added the Fibonacci Element. Produced in house using additive manufacturing technology, the Fibonacci Element can be printed according to pre-designed parameters. Such is the precision of the additive manufacturing software, that the Wilson Benesch design team can see in cross-section and design three-dimensionally the optimal layup of carbon fibre and nylon, defining both stiffness and weight across the structure. The result is a new geometrical form that is comprised of a double curvature with both open and closed aspects in the form of a lattice structure again borrowed from natural geometry. 5 different materials and adhesives provide significant improvements in both the accuracy of the frequency response and the reduction of distortion. This is a critical aspect of the relationship between the drive unit and its ability to integrate with the roll-off of the tweeter and bass drive units. In the past, several materials have been drawn upon to enable the fine-tuning of this marriage. Additive Manufacturing has opened up a new chapter in the pursuit of this subtle but extremely important aspect of loudspeaker design. For the first time, the principal aspects of this structure can all be adjusted in a way that was previously impossible.

The latest iteration of Wilson Benesch tweeter technology builds upon the Semisphere tweeter design pushing it into the next generation. As with all Wilson Benesch designs, the advances of the previous generation are built upon an iterative research and development pathway. With the Fibonacci tweeter, advances have been made within the structures adjacent to the motor and the hybridised dome. The Fibonacci tweeter faceplate is formed from a carbon fibre – nylon composite structure creating a geometrically optimised structure – the Fibonacci Element – that has been inspired by sacred geometry found in nature. In terms of acoustic performance, the faceplate delivers a new benchmark in terms of flat frequency response and ultrawide dispersion. In addition, the Fibonacci Element is decoupled from the motor and tweeter chassis which almost entirely eliminates structural borne resonance within this critical structure that surrounds the tweeter dome.

The principal low-frequency load of all loudspeakers in the Fibonacci Series is delivered by the Isobaric Drive System. Here two Tactic 3.0 Drive Units combine to create an Isobaric Drive System which is responsible for reproducing an incredibly tight and controlled bass response that is perfectly integrated with all other woofers in the loudspeaker chassis, particularly the midrange Tactic 3.0 drive unit. This system is faster and exhibits far less distortion than the large bass drive units often used by speaker manufacturers.

Wilson Benesch started development of its own drive unit diaphragms, including those made from a carbon fibre/epoxy matrix in 1995. Research was conducted using alternative hard dome materials. Without exception, Isotactic Polypropylene was favoured for its natural sound and the ability of this material to absorb energy and avoiding complex breakup modes in the diaphragm. This critical material characteristic allows the Wilson Benesch design team to achieve mechanically and acoustically what would otherwise be implemented in complex crossover designs with a series of inductors and capacitors. This reductive approach to crossover design maintains phase, linearity and the degree of control over manufacturing and design of both the drive unit specifications and the enclosure air volume allows Wilson Benesch to eliminate all crossover components in the midrange drive units of most Fibonacci Series models running the drive unit directly amplifier coupled.

One of the most important principles in structural engineering is loading. All modern buildings are built upon solid foundations. It is the reference point for everything above it, transferring the load of the structure into the ground. Within loudspeaker design, it is crucial to create a stable point from which the drive units can propagate complex and accurate waveforms that we appreciate as music. The Omnium foot is machined from a 120kg slab of high-grade aluminium alloy, which is then combined with two extension plates that are bolted to the main structure with high tensile bolts. Add hand-wheels and the spikes; all design and manufactured in-house at Wilson Benesch and the whole foot assembly weighs in at 30kg.

The Omnium enclosure is held under tons of compressive force using 13mm threaded steel bars which tie from the aluminium loudspeaker mid-plate into the Omnium foot. In turn there is a 13mm steel tie from the mid-plate into the top-plate. These vertical steel ties exert tons of compressive force in the vertical axis where the first resonant modes will emerge.

Every Wilson Benesch loudspeaker is hand built for you. In addition to their standard finish, they offer a range of Premium Natural Wood Veneers, Premium P1 Carbon Fibre and Premium Paint Finishes. Want to create something unique? Contact Nirvana Sound to create something truly unique to you. This level of individualisation just adds that something special to the ownership experience of these premium pieces.

The Absolute Sound, Robert Harley, 2019
The Wilson Benesch Eminence is a different kind of speaker. Its engineering is unique; its appearance is idiosyncratic; and it sounds unlike other world-class loudspeakers. In the ability to convey music’s dynamic expression, rhythmic flow, and timing, the Eminence is simply unequalled. These are important, and often overlooked, qualities of musical realism. Hearing music’s transient nature reproduced accurately is startling and drives home the fact that virtually all other dynamic loudspeakers act like a dynamic filter between you and the music. Moreover, the way the Eminence resolves pitch, texture, and transient information in the bottom end is nothing short of revelatory.
Read Review
Dagogo, Constantine Soo, 2020
… the Wilson Benesch Eminence produced a wall of sound in pristine, articulate tonality and supreme driver coherency… This is the first time I have heard this level of tonal coherency and resolution in a speaker…
Read Review