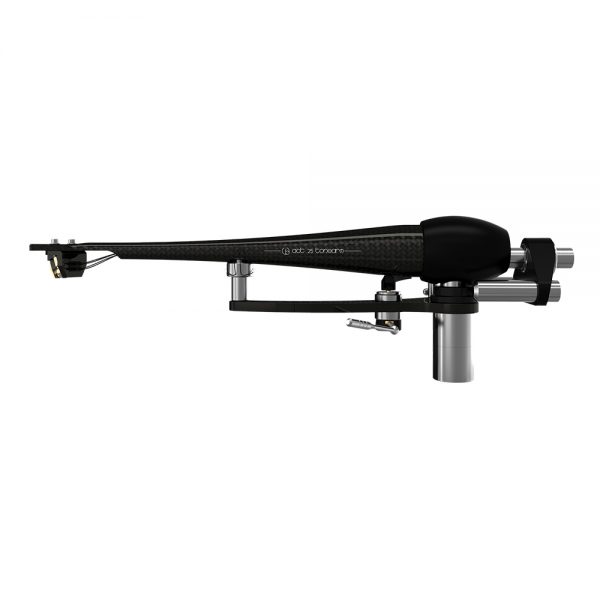 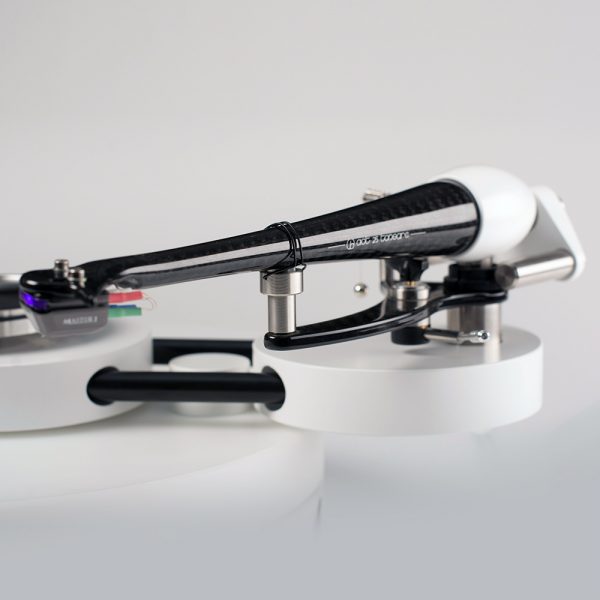 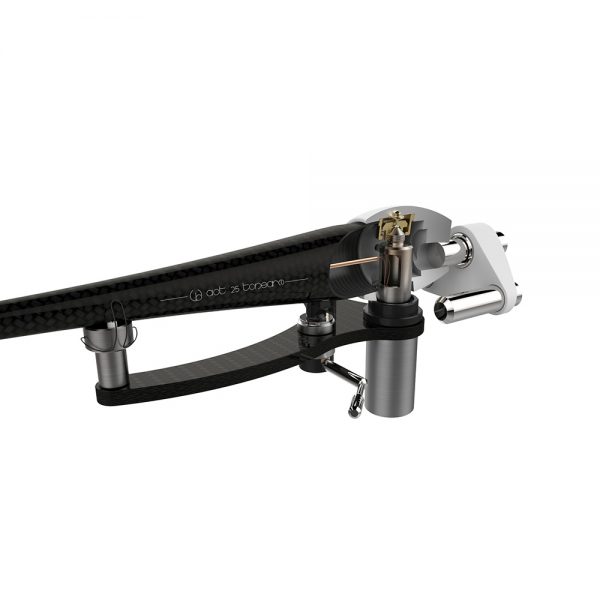 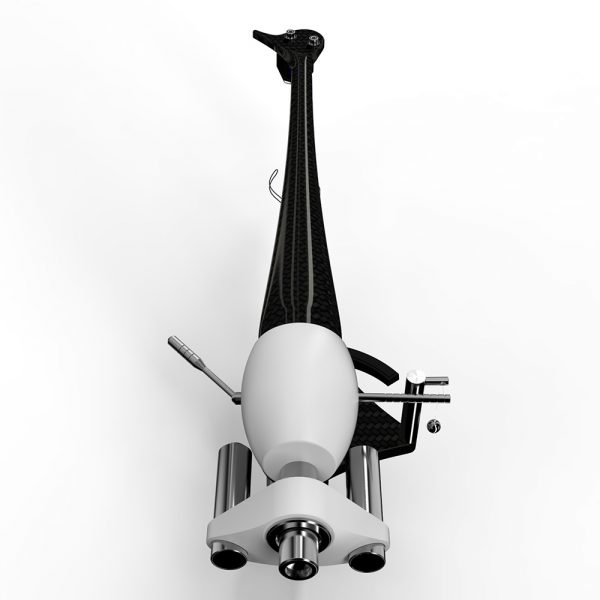 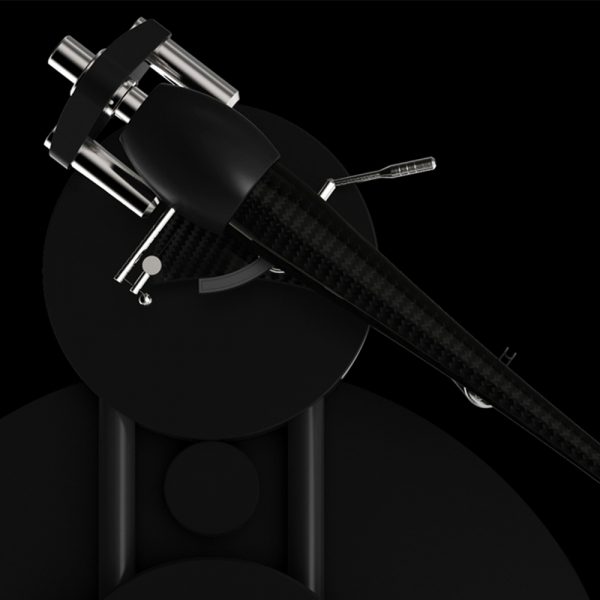 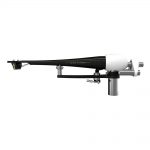 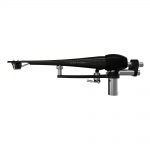 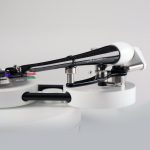 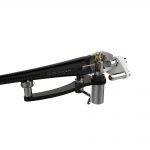 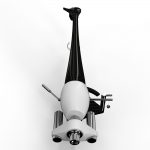 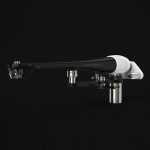 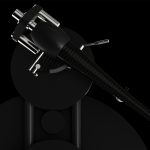 At Wilson Benesch’s inception, their tag line “The Future is Carbon” acknowledged the potential for carbon fibre to change the way in which high performance systems would be manufactured and in doing so change our paradigm around what we should expect from high-end audio. More than 25 years on, examples of this change can be seen across the aerospace and automotive industry where ultimate performance is required. Despite many applications using carbon fibre predominantly for its strength to weight advantages, it is the unique stiffness and damping properties of carbon composites which are of primary concern for Wilson Benesch within audio engineering.

The A.C.T. 25 tonearm geometry has been highly optimised through finite element analysis (FEA) to provide stiffness and damping across the helical, tapered form of the tonearm. The geometry also reduces material use and thus the mass of the assembled tonearm, reducing the mass requirement of the counterweight and subsequently the system overall.

The carbon fibre arm tube terminates into the aluminium eggshell, the geometry of which has been optimised to achieve a maximum stiffness to weight ratio. Residing beneath the ‘egg’ is the kinematic bearing, formed by a brass mount which terminates with a brass ball cap holding captive three 1mm carbon-chrome ball bearings. This creates a high pressure, triangulated frame of reference ensuring that the centre point of the bearing can never change. It is a beautifully simple, yet highly precise and stable design.

Internally the tonearm is wired with silk covered Litz wire, terminated with gold plated RCA Phono plugs. Other features include a solid carbon fibre arm board to support the tonearm when not in use.

As the leader in advanced carbon composite engineering in the high-end audio industry, Wilson Benesch provide two tonearm options, the A.C.T. 25 Tonearm and the Nanotube One Tonearm. Both can be fitted to the Circle 25 turntable or used with any other high-performance turntable. 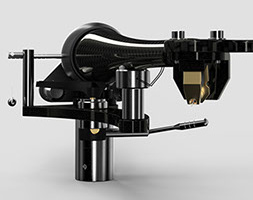 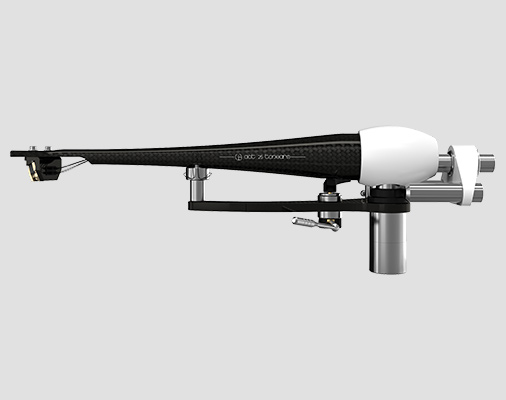 Carbon fibre is truly one of the world’s wonder materials: Torsionally 10x stiffer than titanium; half the mass of aluminium; 5x the specific stiffness of steel and a damping coefficient unparalleled among conventional engineering material by an order of magnitude. Approximately 1/25 the diameter of a human hair, each carbon fibre filament is barely visible to the naked eye. But organised in a woven twill pattern and wrapped around a helix, the combined effect of millions of carbon fibres has been employed by Wilson Benesch to derive a performance advantage in terms of torsional stiffness and damping. The A.C.T. 25 Tonearm geometry has been highly optimised using finite element analysis (FEA) to extract maximum stiffness and damping across the tapering form of the tonearm. The geometry also reduces material use, therefore reducing the mass of the tonearm at the end, the mass of the counterweight and the overall system mass.

The bearing features four 1mm carbon-chrome ball bearings, three held captive in a brass ball cap located in the egg shaped housing at the rear of the tonearm. When mated the fourth ball is held in a high pressure triangulated frame of reference ensuring that the centre of movement can never change regardless of the age of the system or the ambient temperature. It is easy to appreciate how important the stability and consistency of this bearing is when one considers that a turntable is purely a system of measurement, designed to allow a ~10nm (0.000001mm) cantilever tip to trace a ~50µm (0.05mm) groove in a piece of vinyl.

The carbon fibre arm tube terminates in the aluminium eggshell. The geometry of this component has been optimised to impart maximum stiffness while keeping its weight to a minimum. Each component is part of a whole; the eggshell has a spike located on its internal dorsal surface which holds captive a carbon chrome ball bearing that mates with three further ball bearings in the tonearm shaft to form the kinematic bearing. Thus the geometric form, optimised stiffness and weight of the eggshell is central to the performance of the tonearm as a whole.

The counterweight is formed from two hollowed 55mm stainless steel poles and a triangular aluminium body. This structure slides onto a stainless steel shaft at the rear of the tonearm eggshell, to counterbalance the weight of the tonearm and the cartridge around the pivot at the kinematic bearing. The lightweight counterweight allows adjustments to the weight at the cantilever. It also allows micro adjustments to azimuth to ensure that the cartridge and the tonearm are level or parallel relative to the vinyl during replay.

Vertical tracking angle (VTA) has a significant impact on to the character of the sound produced by a cartridge. Furthermore, no two cartridges are the same. The A.C.T. 25 Tonearm allows for the VTA to be set by adjustment of the tonearm shaft mounting height in the tonearm hub.

High quality, silk covered Litz wiring internally legislates for the perfect signal along the wire’s length from the cartridge to the phono stage. The wiring is terminated with gold plated RCA phono plugs.

When not in use the A.C.T. 25 Tonearm can be parked at the side of the turntable on the exquisitely beautiful carbon fibre armboard. This solid carbon fibre component is formed from multiple sheets of carbon fibre layered on top of one another, baked at high temperature to form an unyielding, 5mm thick solid carbon fibre support strut for the A.C.T. 25 tonearm. There is no performance benefit; this is a question of aesthetics and finishing in a high-performance, high technology tonearm.

TNT-Audio, Roger McCuaig, 2020
This arm makes every cartridge I use and every record I play sound as good as or better than it ever has. Isn’t that really the essence of the role of a tonearm, don’t mess up the source? I will be happy to keep in my system for a long time….
The design of the A.C.T.25 is at the same time technically very sophisticated and a simple KISS* strategy. The complexity resides in the choice of materials, the optimization of the various components, the design of the pivot bearing and the attention to detail. However the design is stripped down to the essence of a tonearm; a uni-pivot, an armwand and a counterweight. No magnets, dampers, micro-adjustable VTA dials… At first, this might seem to be a strange combination but the more one thinks about it, the more it makes sense. Keep it very simple then apply the best material and engineering possible. This approach has certainly been successful for Wilson Benesch. It’s always nice to find a component that lives up to its reputation.
Read Review