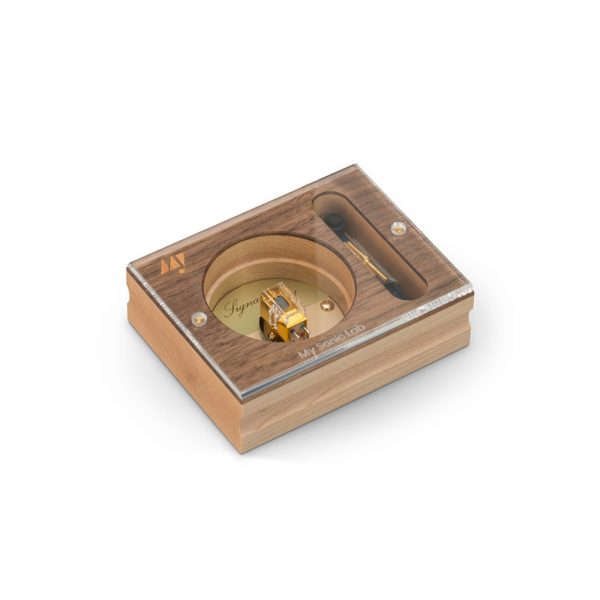 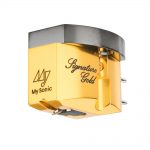 The Signature Gold was released for My Sonic Lab’s 10th anniversary. Matsudaira-san evaluated every aspect of his previous Eminent designs for areas to be improved. A stronger two-component chassis, higher grade internal wiring and improvements in the suspension led to a more refined sound. However, it is the 10% larger SH-μX core that makes the Signature Gold excel at energetic expression and power.

When the Signature Gold was released, many around the world considered it to be a game changer. Compared to the Eminent designs, the Signature Gold has more extension, slam, power, and dynamic range, however the defining characteristic is ….energy! This cartridge sets a new paradigm for sonic performance….it simply makes music feel real, believable and palpable. It has a perfect top to bottom coherency and endless detail. Even seasoned audiophiles have reported shock at how much more information was hiding in the grooves, far more than rationally seems possible. Isn’t this a medium with maximum 70dB dynamic range, surface noise, and grooves that get too close together when the music is too loud? Not at all! This simply blows apart the perceived or accepted limitations of the medium. Winner of the prestigious Stereo Sound Magazine 2012 Grand Prix Award.

Japan’s Stereo Sound
I’m wondering how and why a cartridge came to reproduce such a good sound; in other words, why has such a cartridge not come out until today? Compared to the current cartridges, certainly uplifted by several stages, this cartridge beautifully traces any discs, thus presenting you wonderful sounds. I take this as a breakthrough in cartridge.
From a user on whatsbestforum
Listening Impressions: The Sig. Gold is more neutral with a flatter tonal/frequency response. It is slightly more extended in the bass and treble. It is extremely resolving and it has explosive dynamics. I had never heard the amount of pure energy on the Sheffield Drum Record and on the Bosendorfer piano on Beethoven’s Appassionata from my system. Full orchestras also had an increased power and scale from even my small system based on the Magico Mini II speakers. It really was incredible. With this cartridge, I feel as though I’m hearing more from my records than ever before. And it is very natural sounding.