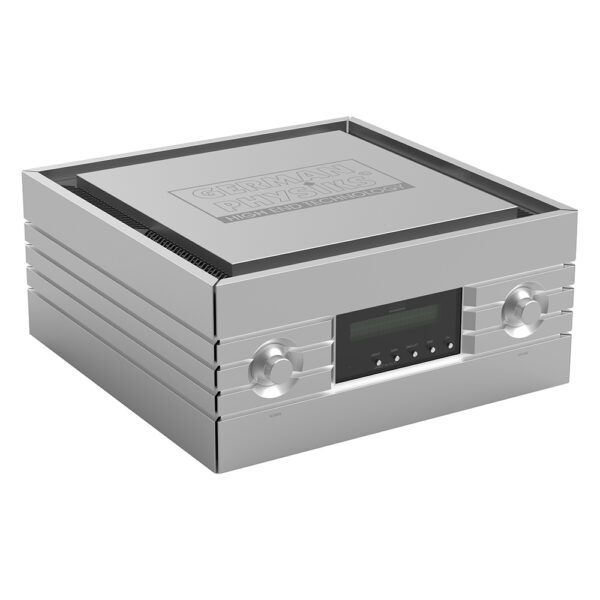 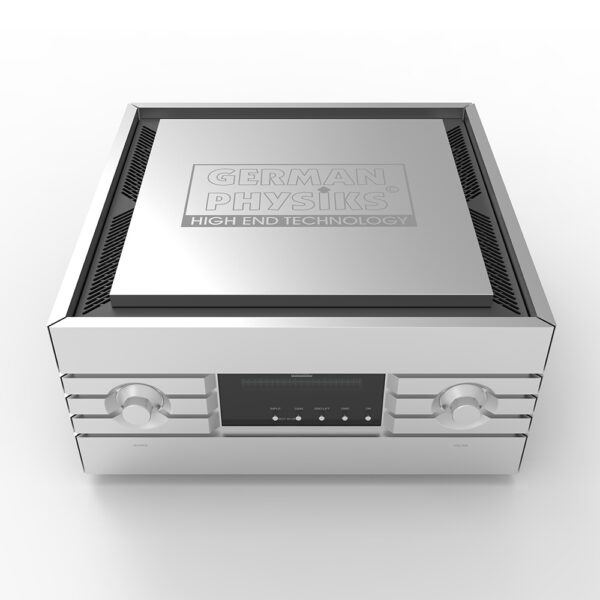 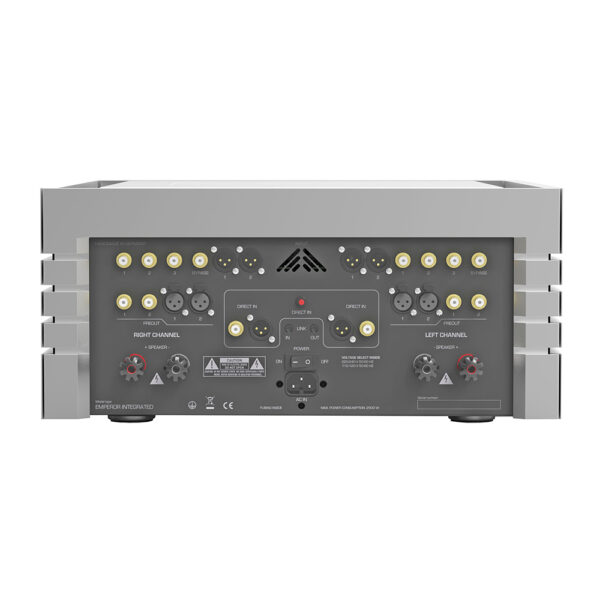 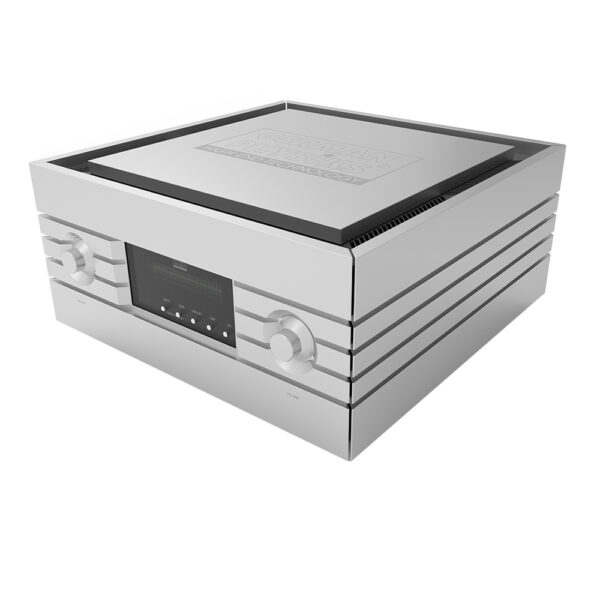 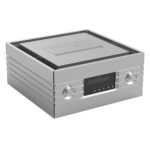 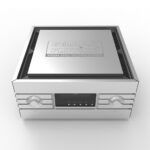 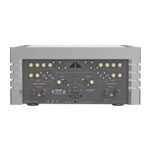 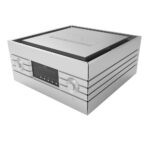 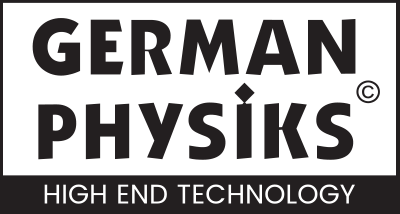 3 balanced and 3 unbalanced inputs are provided per channel, allowing flexibility for use in a wide range of system configurations. Each channel also has 2 balanced and 2 unbalanced preamplifier section outputs, making it easy to add additional power amplifiers when the unit is used in multi-amp systems. Direct inputs are provided for the power amplifier stage, allowing this to be used independently of the preamplifier section.

It uses a large toroidal power transformer and conservatively rated reservoir capacitors, enabling it to deliver 600W RMS into 4 ohms with both channels driven. This ensures that it will drive any German Physiks loudspeaker and virtually any other loudspeaker, while providing excellent dynamics and bass control. Large heat sinks concealed within the case, allow the unit to run continuously at high power whilst remaining cool, thereby improving reliability.

The heart of an amplifier is the power supply, so great care was taken with the design to ensure that it would be able to provide the audio sections with a source of power that was as stable and noise free as possible. The preamplifier section, power amplifier stage and control section all have their own independent toroidal power transformers. These were chosen for their low external magnetic fields. To minimise the effects of stray magnetic fields, all four transformers are housed in their own screened enclosures.

The amplifier’s incoming mains power is not routed through the power switch, as these can have a detrimental effect on the sound, more so with power amplifiers. Instead, this switch supplies power to the standby circuit and when the front panel ‘On’ button is pressed, this turns on a high current relay which carries the mains power.

When a large power supply is connected to the mains supply, the initial in-rush current can be high enough to trip circuit breakers or blow fuses. To prevent this, a 4-stage soft start circuit allows the power supply to “slowly” charge before it is switched out of the circuit. This also reduces the stress on the power relay. High quality power supply capacitors are used with additional decoupling capacitors located physically as close as possible to where they are needed in the circuit. Great care was also taken with the internal grounding to prevent the introduction of noise.

As a further noise reduction measure, a front panel ground lift switch allows the amplifier’s signal ground to be disconnected from the chassis safety ground and is useful in eliminating hum when this is caused by a ground loop. This is where there is more than one ground connection between two pieces of audio equipment, thus forming a loop. This can act as a single turn coil and stray magnetic fields from nearby equipment and/or power cables can induce a mains frequency current in this loop, which then produces a hum that is heard from the loudspeakers. If this is the cause of hum in a system, using the ground lift switch to break this loop will stop the hum.

A large easy to read front panel display provides a clear indication of the volume control setting and the unit’s status. A front panel switch allows the display to be dimmed to 50% or switched off altogether. When the display is switched off and a front panel control is operated, the display will come on for a few seconds before switching off again. Input selection and volume level may be adjusted from the front panel, or via an infrared remote control, which is included.

The provision of outputs from the preamplifier section and inputs to the power amplifier section allows the Emperor integrated amplifier to be used in both multi-amp systems and fully active systems with an electronic crossover, such as their own DSP-X. This gives the user a number of options for upgrading their system, whilst avoiding the need to replace their original amplifier and the consequent costs this would involve. Contact Nirvana Sound for further information about configuring an active system.

The Emperor Integrated amplifier is designed and manufactured in Germany. To ensure excellent sound performance and high reliability, great care and attention has been devoted to all stages of production: from the initial design to component selection and final manufacture.

Before a single component was soldered, many hours were spent carrying out detailed computer modelling, in order to optimise the technical performance of the various sections of the design. All the components were selected for both their technical excellence and reliability. To further enhance the reliability, all components are operated well within their maximum limits. The final selection of components and topology was made on the basis of exhaustive listening tests, as well as detailed measurements.

Great attention was paid to the aesthetics and the mechanical construction. This is a very high quality product, so the look and build quality had to be of a commensurate level. The construction uses an internal steel chassis with a 15mm thick silver anodised aluminium outer case. This provides magnetic screening, together with structural rigidity to minimise the effects of external vibration. The fit and finish of the chassis is first class and this combined with the impressively smooth feel of the controls, reassures the user of the high level of quality that this product offers. Premium grade WBT loudspeaker terminals provide a reliable and high quality connection and are also easy to secure and release.

The extreme attention to detail in the design, engineering and build of the Emperor Integrated amplifier was carried out for one simple reason – this is a serious attempt to build the best sounding integrated amplifier possible. Apart from having created a one chassis amplifier with 600W of effortless power that can drive any speaker with ease, German Physiks have created an amplifier with fantastic levels of transparency, openness and resolution. This is a sonic tour de-force that is replacing amplifiers in cost-no-object systems around the world. Try to keep your jaw from hitting the floor…

HiFi+, Alan Sircom, 2022
There’s a sense of absolute unburstability……..It exudes a sense of quiet confidence, physical control and presence because nothing fazes the Emperor amp… a profound sense of stereo staging, a fully three-dimensional experience rooted in a sense of solidity and presence…….If there were any justice in the world, there would be a small army of audiophiles, storming the barricades of mediocre sound, shouting cries of ‘For the Emperor!’ at the top of their lungs.
Read Review
Stereoplay, 2020

Review is in German. Below are a selection of passages from the review that have been translated into English:

“We only use the label “Super Test” if a component far exceeds the usual standards. It can be that the construction has been taken to extremes, that the product advances the state of the art, or that it provides a sound experience reaching new levels. Here is another miracle worker. The German Physiks Emperor Stereo Integrated Amplifier has enough muscle to drive every imaginable loudspeaker to the limit. It combines sheer power, with ultimate design skills and thus raises our sound experience to a new level. Let’s be clear: This is the most complete integrated amplifier that has ever played in our listening room. It brings everything with it: emotion, analytical ability, deep visceral bass. A complete experience!”

“Our laboratory was very impressed with the drive capability of the Emperor. It was clean with immense power. The loudspeaker that this amplifier cannot drive does not exist. It delivered 361 watts into an 8-ohm load, both channels driven and easily coped with loads that imposed large phase shifts. How does it behave when the load impedance was set to 2-ohms and reduced towards a short circuit? The Emperor simply flexed its muscles and with over 1000 watts, prepared to burn off the loudspeaker cable, as though it was a fuse.”

“Perfectly neutral, with a wide bandwidth and a gentle drop well outside the audio range.”

“But this says nothing about the amplifier’s musical abilities. The Emperor could be a refrigerator without emotion. But it is not. A few bars were enough for us to know that we were standing in front of a miracle.”

“A brute with elegance”

“Such force, such control – only a few seconds in and we are in a rush of sound. This Decca recording in particular is notable for its solid and meaty sound. There is no dispute, the horses are let off the leash. This is a wonderful piece of music – and this amplifier really lets the horses run. There is very impressive drive and power in the lower octaves. We took extra time to precisely set up the loudspeakers. No matter what we listened to, we felt intoxicated. We had butterflies in our stomachs, while our brains were running at full speed – what a party! If we really did perceive any limits, it was because of the loudspeakers, the source and sometimes even the loudspeaker cables. The Emperor Integrated however, was never taxed. It remained unflappable.”

“Here you can wonderfully experience how an amplifier finds the perfect path between brute force and the ability to portray extreme delicacy. The body and fullness of sound that we associate with a tube amplifier was wonderfully present. In addition, we had the unrestrained, unlimited power of a solid-state amplifier. Clearly, the manufacturer has spent as much time listening, as he did thinking about the design and its construction.” 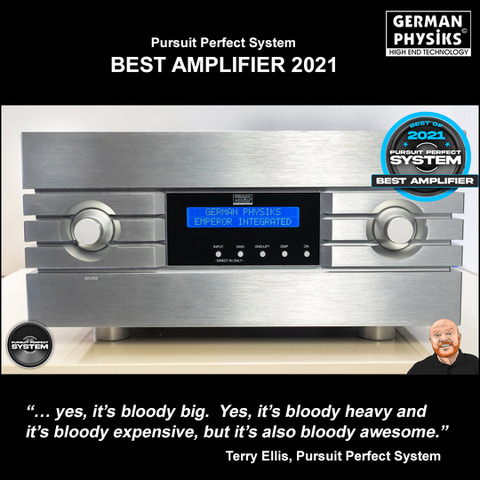