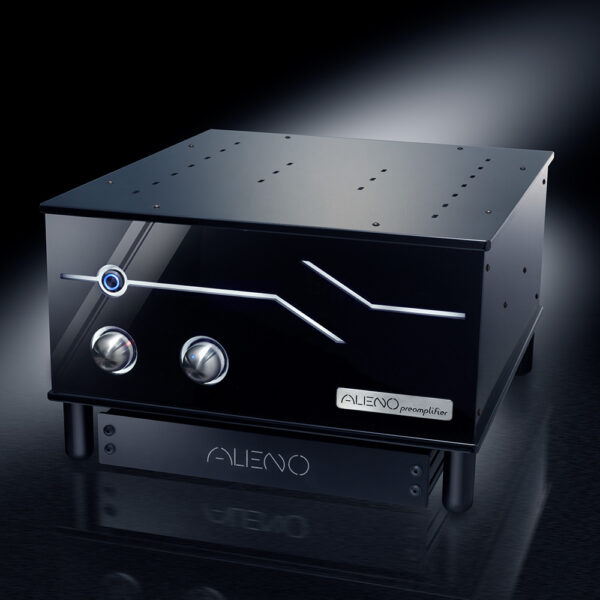 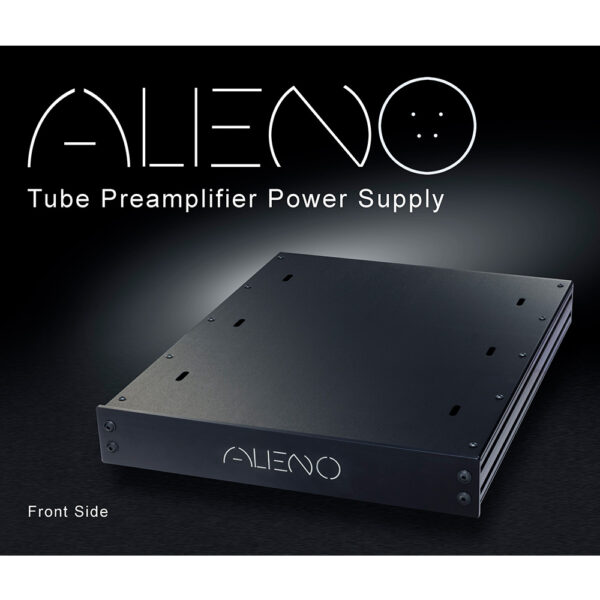 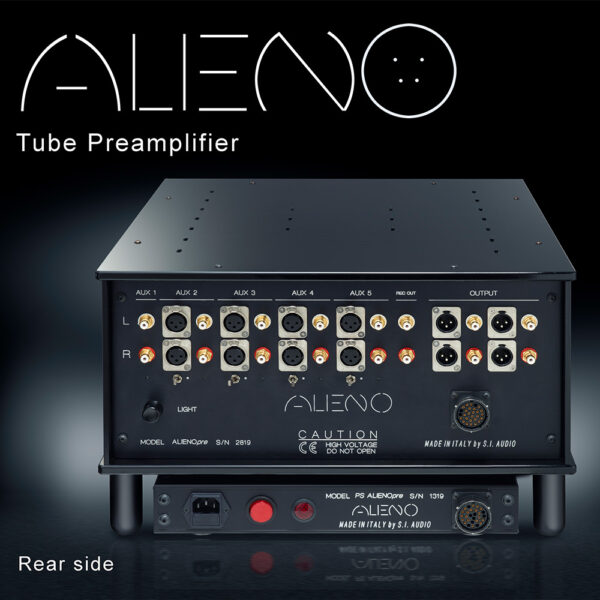 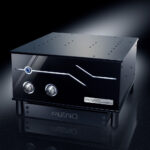 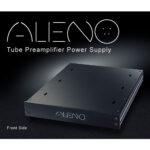 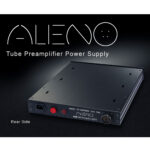 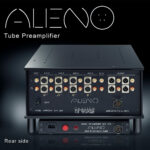 This extraordinary amplification system is virtually the definition of extreme high-end audio. Audio engineer & inventor Fulvio Chiappetta conceived the theoretically perfect amplification system but his ideas were considered impossible to implement. What he wanted to achieve had never been done before – design an amplification system with the purity, refinement and emotional communication of a single ended triode design however with the power to drive any real-world speaker without the use of an output transformer, a hybrid design or a solid state device in the signal path. Many designers in the history of audio have tried to achieve this ‘Holy Grail’ type of amplifier but it was deemed impossible. After 30 years of experimentation & development, Fulvio unveiled his Alieno amplification system, which consists of a Preamplifier and a choice of two power amplifiers. The audiophile world is still trying to make sense of his achievement and the lucky few who have heard the Alieno sound are saying it’s genre redefining.

The Preamplifier contains many unique technical design features and technologies, most of them being totally exclusive to Alieno. It uses an innovative technology to obtain an ultra-refined yet powerful signal. This technology offers completely distortion-free signal handling rendering the common use of feedback obsolete. There is no feedback used in this preamplifier. From the inputs to the output connectors, a minimal crystal-clear signal path incorporating a selected couple of NOS ECC82 tubes ensures transparency, accuracy and speed of the musical signal.
There are some key technological features which combine to deliver this incredible performance. 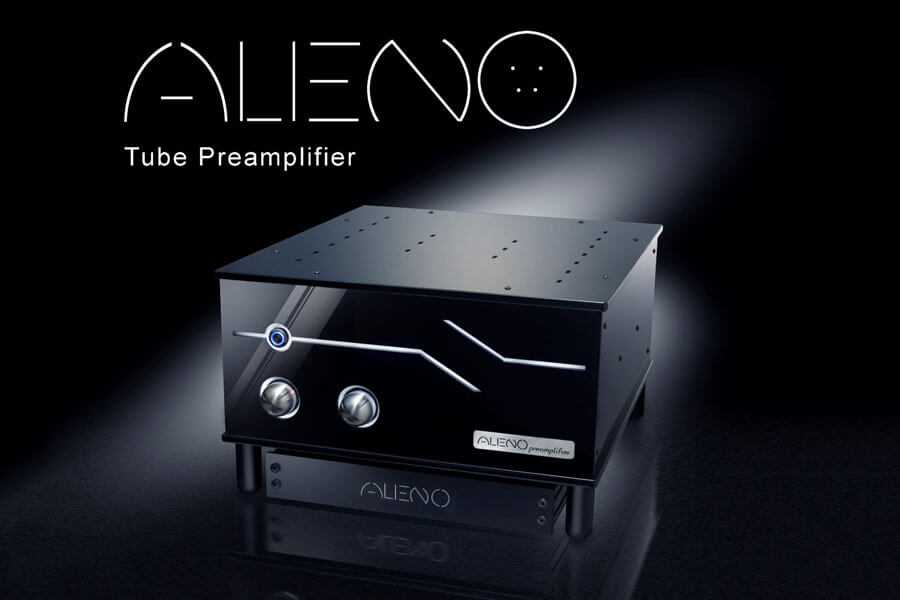 The electrical grounding system within this preamplifier is unique and engineered to a level without precedence. All the grounds of each input/output are independent and separate, even within the same channel between the left and right signal. This is a very complex solution to manufacture, however it guarantees the very best possible signal-to-noise ratio, which means a deeper and more silent background of the sound image (noise floor) and the sound appears to rise from pure silence and be ‘painted’ on a ‘deep black canvas’. The sound is palpably sharper, more detailed and three-dimensional.

This strategy is implemented with high quality precision relays for each channel. Each time an input is switched, the input is muted for about 5 seconds before enabling the new selected input. During this slight delay in switching between one input and another, a further advantage of this technology is the fact that the preamplifier circuits ‘see’ only the selected input, because all the other inputs (even if connected with cables to many sources) are in fact electrically ‘off’, not having their ground reference.

For this reason, none of the unselected inputs can transfer any type of electrical disturbances to the Alieno Preamplifier, which often originate from the grounds (generally all in common) and enter the circuit in the form of hum (typical ground loops). Furthermore, the condition of electrically ‘seeing’ only the selected input allows the Alieno Preamplifier to immediately identify any source that has any unwanted internal disturbances or interferences.

In the Alieno Preamplifier, the unselected inputs are NOT short-circuited (as is the case with many preamplifier designs that suffer from crosstalk) because that condition could be harmful to many of the latest generation digital sources which supply output electrical signals that do not tolerate an encounter with a short circuit when entering a preamplifier. There is also the option to have a dedicated input for pro sources with a floating balanced connection. 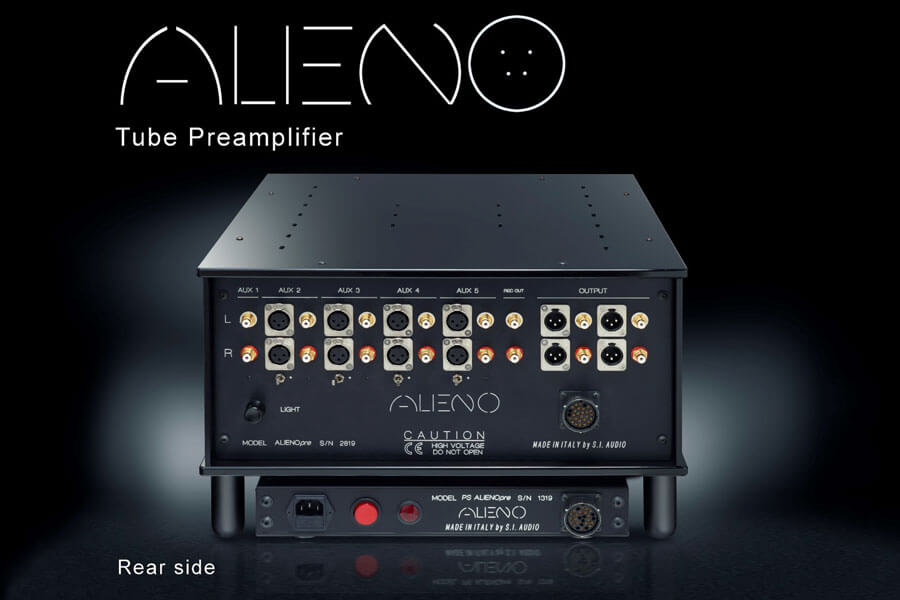 The implementation of the volume control is absolutely critical in terms of the sound quality of a preamplifier and by inference, the whole system. Typically, volume controls are made by a variable resistor which controls the signal in transit. The most adopted techniques in high-end audio are either the potentiometer (a variable resistor based on a sliding contact), or a series of fixed value resistors. The Alieno Preamplifier implements a unique technology which encompasses a step-free behaviour (like a potentiometer), coupled with the superior sonic transparency of fixed value resistors. To the user, it feels like a traditional volume control.

Alieno have implemented an exclusive power supply technology that makes a significant contribution to the sound of the preamplifier. Using a discrete dual mono topology, the Alieno Preamplifier employs four independent power supply units, not including the power supplies exclusively dedicated to cathodes and services. This ensures a fully shielded independent power supply to each the amplification stages. Moreover, each PSU acts in a ‘virtual battery mode’ thanks to the use of special capacitors whose value and topology have never been used before in amplifier applications. 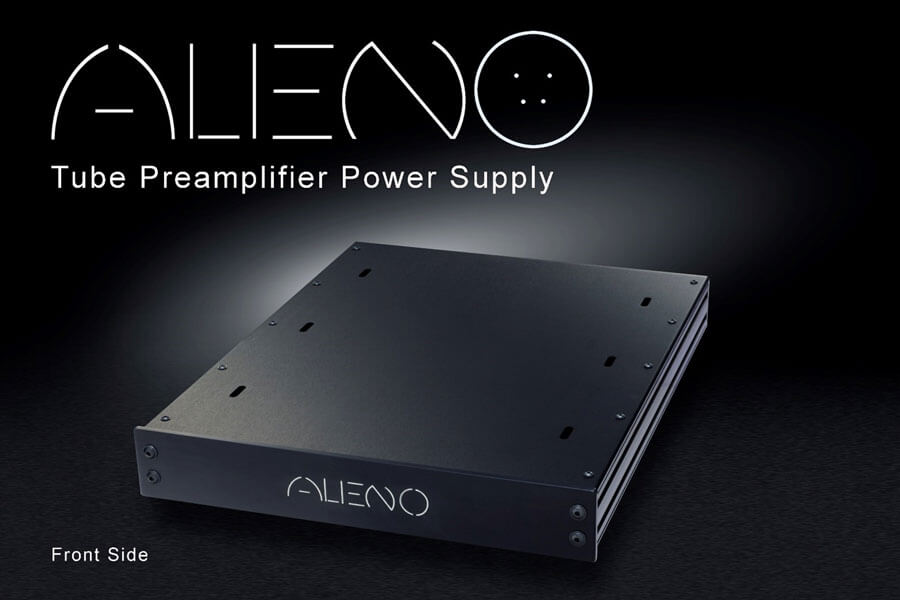 This technology allows the Alieno Preamplifier to work as if it was battery powered and therefore disconnected from the mains power. This de-couples the preamplifier from any electrical harmonics, disturbances and irregularities typically found in domestic mains power supply. A series of high quality heavy capacitors takes care of this task, but to get this ‘virtual power supply’ fully operational, the capacitors need a few minutes to reach their complete polarisation and electrical potential, so it is advisable to turn on an ALIENO Preamplifier and give it at least twenty minutes of low volume playing before embarking on ‘in-depth’ listening, regardless of the temperature of the listening room. Of course, you can listen to it right away, but after that warm-up period the ALIENO Preamplifier is in its best thermal/electrical condition. 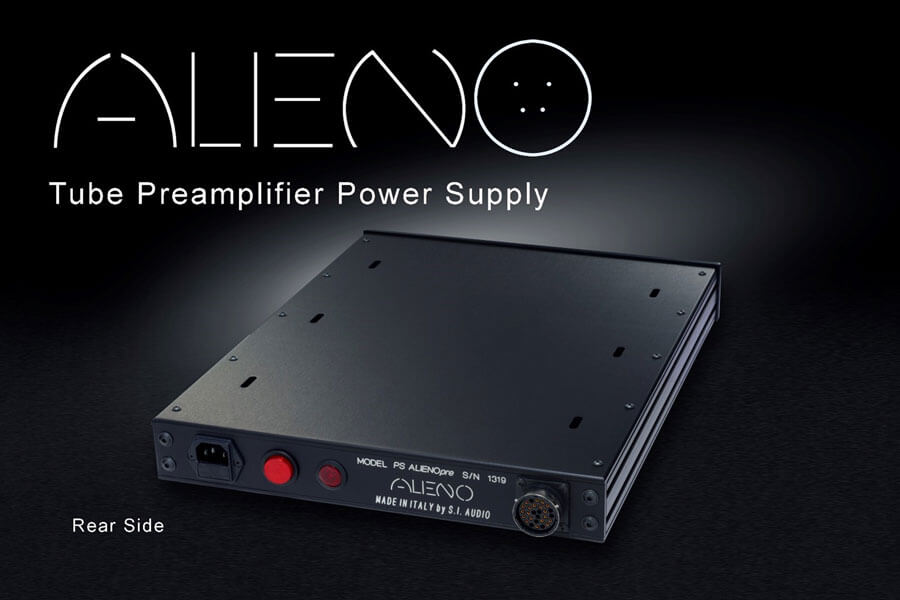 2 Levels of Attenuation For The Inputs

Each input has a selector that allows you to set two attenuation levels for the input signal: – 8 dB and – 16 dB. The components involved for applying these two levels of attenuation are absolutely transparent to the sound, therefore, dynamics, transparency and timbre of the input signal are absolutely preserved and intact as in the zero attenuation position. This solution has been implemented in the ALIENO Preamplifier to cater for sources with diversified electrical output levels. For example, some of the latest generation DACs or digital players have output signals over 5V RMS. By having the option of two attenuation levels, the ALIENO Preamplifier allows the user to maintain a more homogeneous volume position, even when the connected sources have important differences between their electrical output levels.

One of the two pairs of tubes used in the ALIENO Preamplifier is the 6H30 (the other pair is the ECC82). This tube is acclaimed in the audio design field for the purity of its sound. After around a 500 hour break in period, the 6H30 rewards the listener with natural tonality and wonderful realism. In the ALIENO Preamplifier, it is only used at approx. 30% of its electrical limit so it is not stressed and will deliver thousands of hours of reliable service.

The Alieno Preamplifier is a no-holes-barred attempt at making the world’s best preamplifier. It is uncompromising in its design and incorporates multiple exclusive technologies and topologies to create a once-a-generation heirloom piece. The extensive grounding system and the innovative power supply system alone accounts for a large portion of its cost. Putting aside it’s unique design and no-expense spared build quality, it is simply one of the best sounding preamplifiers ever created. It is sonically transparent to the source and facilitates nothing but the music. The preamp is the heart and soul of the system and in this case, it has taken one man 30 years to develop and then hand-build a rare piece of audiophile utopia. There is evidence of engineering genius all over the Alieno and once you experience it, you forget everything you thought you knew. Heavenly. 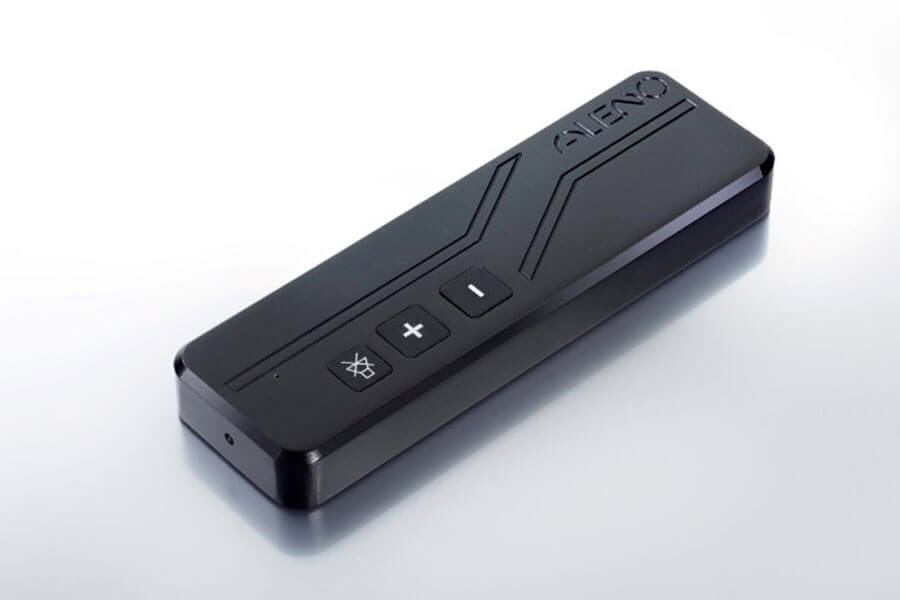 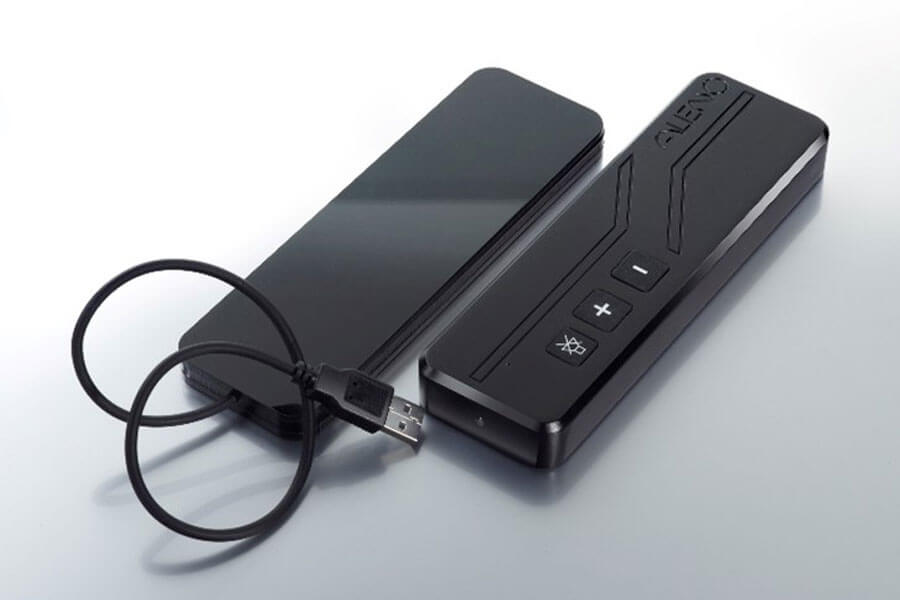